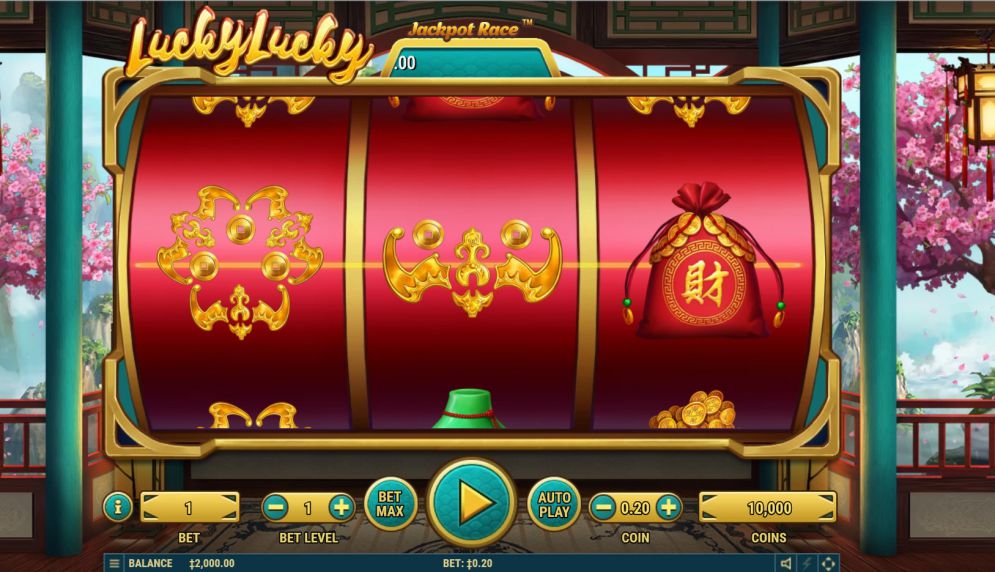 Lucky Lucky is an innovative 3×1 slot game by Habanero that has only 1 payline and offers a good paytable and Wild win multipliers of x2 and x3 that can multiply each other. The biggest prize in the paytable is 50x, for three Wilds, and the best normal symbol pays 25x total bet, or a maximum of 125x when multiplied.

The game is played on three reels but with only one row, and there’s exactly one payline. This is fun and might appeal to all players, even those who aren’t that fond of 3×3 slots with 9 or less paylines. Just because of the innovative approach you might want to spin those three reels. The bet per spin can range from €0.20 to €100, which is a decent range that allows for many betting strategies. 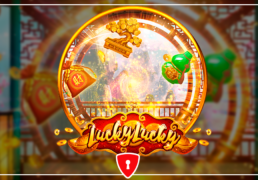 There are six normal symbols in the game plus the Wild which is the best-paying symbol with a 50x prize if you land all three, and randomly a x2 or x3 win multiplier will be revealed when a Wild is part of the winning combination. Wild win multipliers multiply each other. There are no Scatters in this game so no space is taken up by a pointless symbol – all matter.

Since four of the six normal symbols are also golden, just like the Wild, it’s a bit difficult to keep track of your three positions on the reels if you’re using Autoplay as the symbols are just too similar. The Golden Bonsai is the best normal symbol with a 25x prize, then there are two more with 20x and 10x prizes respectively, and then there are three low-win symbols that pay 5x, 3x or 2x each, or 1x if you land any combination of them.

You do need those Wild win multipliers to make the best of this paytable since multi-payline wins aren’t possible, so only with a good win multiplier can you reach wins of 50x or more. In short, you need to get very lucky to win a decent amount in the Lucky Lucky slot, and until you do get lucky your balance will be continuously decreasing. 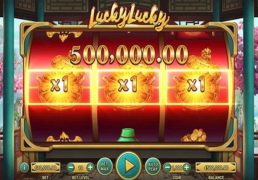 There are no bonus features to speak of other than the win multipliers, that can reach up to x3 individually, and that can multiply each other. This can still be quite powerful as each win can be multiplied by up to x6, which means the biggest available prize is 125x your bet.

This slot game has theoretical return to player (RTP) of 98.02%, making it one of the best-paying slots released in 2019, and one of the best-paying slots that are actually worth playing and that appeal to the modern audience. However, even though the game has a very low house edge, in practice the maximum wins are too small, so you can only hope to win a small amount in this game and never a life-changing one.

Lucky Lucky is primarily targeting the audience that’s playing 3×3 slots, and those who like to play one payline only to increase the variance, but then it falls short because it’s not offering wins that are high enough for that purpose. You’d be better off playing one payline on some other slot game. This is a specific slot that will appeal to some players and alienate the others, and the only way to know is to try for yourself. Find this game in Habanero online casinos and try it out. Do play this one in demo mode first, to see if you like it or not.

Lucky Lucky is an innovative 3×1 slot game by Habanero that has only 1 payline and offers a good paytable and Wild win multipliers of x2 and x3 that can multiply each other. The biggest prize in the paytable is 50x, for three Wilds, and the best normal symbol pays 25x total bet, or a maximum of 125x when multiplied.

Hurray! There is a competition going between users of our site!
You have to do nothing, but browse out site, and win a daily prize. Click here to read more.
You current ranking:
Time Left: 10h 37m 37s
Gambling is for 18+ though some countries may have other restrictions...Remember you should always Gamble Responsibly
We use cookies to ensure that we give you the best experience on our website. If you continue to use this site you agree to allow us to use cookies, in accordance with our Terms & Conditions.Agree & Close