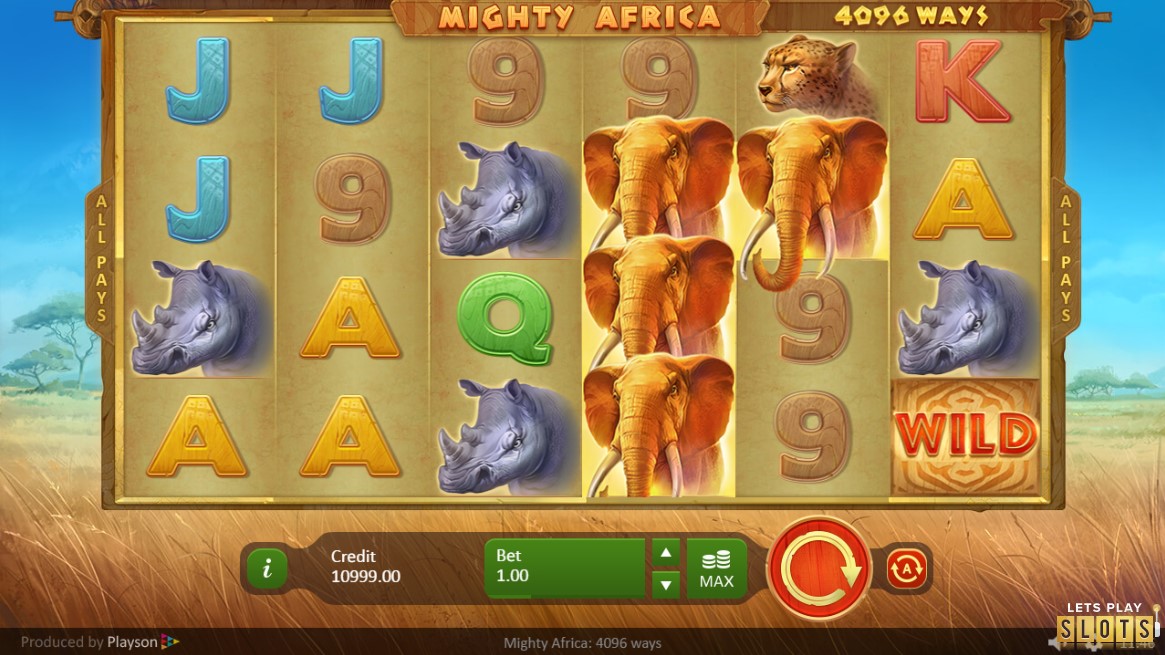 Africa has many wild animals, and you’ll get to see some of them on the reels of this Playson slot. Prepare yourself to witness the inbuilt Wild, Scatter, Free Spins and other features of the Mighty Africa game.

Africa will always make an intriguing theme for an online slot, in my opinion. There’s a lot that can be done with it – although most developers choose to go in the same direction that Playson has gone with Mighty Africa. This isn’t a bad slot game, though. Far from it. The graphics in it are very nice to the eye, while the overall gameplay is strong and smooth. It’s an exciting slot to play with some entertaining inbuilt features alongside. 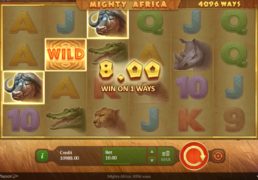 The layout of this slot features six reels, which makes it one reel larger than what is considered to be the norm for video slots. Four rows are present alongside these reels, while a total of 4096 winnings ways have also been integrated into the game. These winning ways, I discovered, expand to 31,104 ways to win during the game’s freespins round. Your bet is easily changeable, with buttons on hand for this at the bottom of the reels. They allow you to select between wagers of €0.25 and €100 per spin.

As far as the symbols in the game are concerned, these start with the regularly-seen playing card icons. They run from the lowest of 9 and 10 through to the highest of K and A. The latter of these icons can pay out up to €400. You’ll then see five animal symbols, which are of the cheetah, the buffalo, the alligator, the rhinoceros and the elephant. You can win up to €800 from the appearance of the elephant icon. 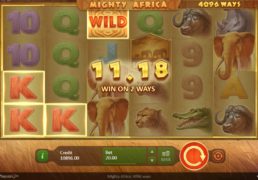 The first of Mighty Africa’s special features comes in the form of its wild symbol. This one can substitute for all other symbols on the reels, helping you to create winning combinations. The only exception to this rule is the slot’s scatter symbol. Wilds will not appear on the first reel of the game.

The scatter symbol of Mighty Africa is the elephants walking against a sunset backdrop. If you spin three or more of this symbol into view, the freespins round begins. It was pleasing to find that there are up to 50 freespins available in the slot, while two or more scatters showing up during the feature round will trigger additional freespins for you.

During the freespins round, a Wild Split function is also active. Every time a wild symbol lands on a reel, it splits, leaving two or three wild symbols in its place. 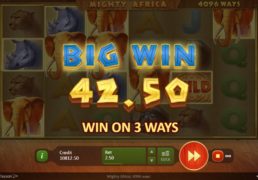 To say that the African theme is quite overdone in online slot games, I quite enjoyed spinning the reels of Mighty Africa by Playson. The graphics within are done well and the overall gaming experience is pleasing, too. It’s always nice for me to see freespins in a game, while the Wild Split makes something fairly unique for the slot to boast.

Africa has many wild animals, and you’ll get to see some of them on the reels of this Playson slot. Prepare yourself to witness the inbuilt Wild, Scatter, Free Spins and other features of the Mighty Africa game.

Hurray! There is a competition going between users of our site!
You have to do nothing, but browse out site, and win a daily prize. Click here to read more.
You current ranking:
Time Left: 22h 30m 8s