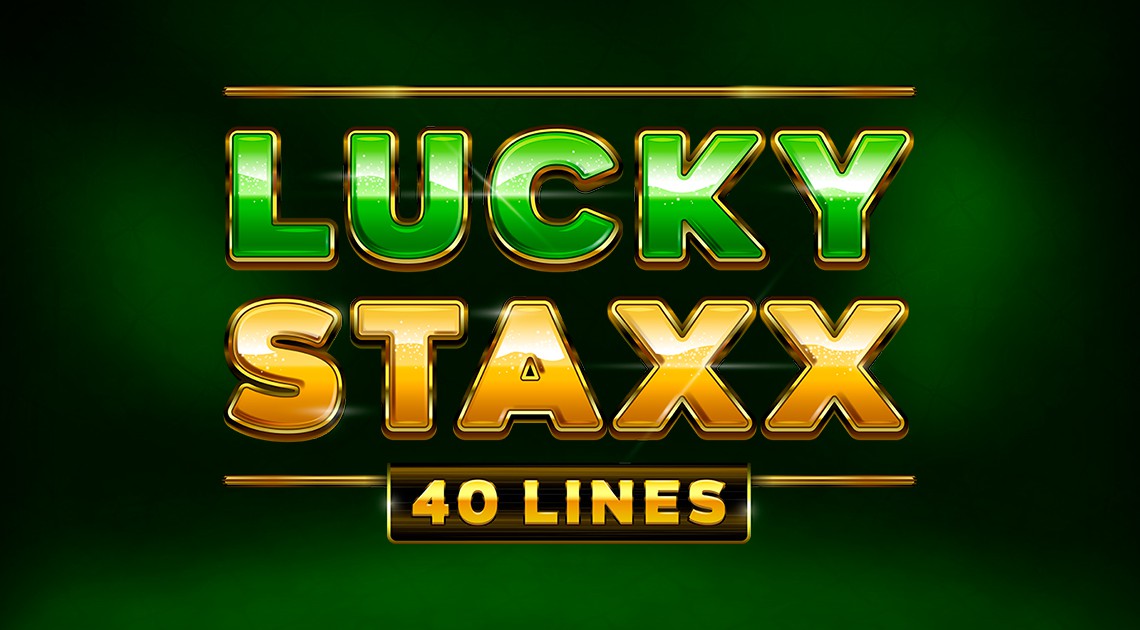 Lucky Staxx 40 Lines is a classic slot with fruit symbols and very little else, as only a Wild and a Scatter are present but there’s no free spins game. Align the stacks properly and you can win up to 1000x your bet on a single spin! 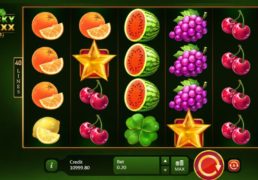 Lucky Staxx 40 Lines is a Playson title that was released in December 2018, and it has really good graphics, probably the best among fruit-themed slots. It’s basically a 6×4 fruit machine, and since I don’t normally enjoy this type of slots I only played it briefly, but enough to give you my unbiased impression of this Playson title. 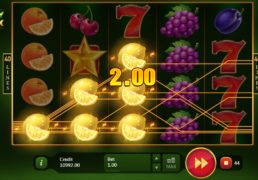 The game is played on a 5×4 board with 40 fixed paylines. You can choose your bet between $0.20 and $100 per spin, which means that the minimum bet per payline is $0.005. The paytable can issue prizes up to 25x your bet when it comes to normal symbols, and 25x is what you’ll get for five Sevens. Bell pays less, 15x, and Grapes and Watermelon are worth 10x each. There are four more nicely detailed fruit symbols, and they can pay up to 4.50x. Scatter is the best-paying symbol in the game as it will pay 400x your bet if you land all five, or 20x if you land four. The main and only feature of the game is the fact that symbols can appear stacked, which then allows for multiple winning paylines on the same spin, even a full board win.

With this kind of paytable it’s possible to get big wins every now and then, though these wins won’t be incredible, and the game doesn’t pay very often so you’re usually left with a non-winning spin or a spin in which you won less than your bet, such as the 0.25x prize for landing three-of-a-kind of one of four lowest-paying fruit symbols. Wild substitutes all symbols except for Scatter, and appears on reels 2, 3 and 4 only. 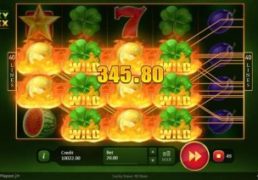 Lucky Staxx doesn’t have a free spins game, or anything that would remotely resemble a bonus for that matter, so you’re left with a bare bones game in which you try to form those winning paylines. The idea, of course, is to have all the stacks align so you get a full board win. In case of the best symbol, the Seven, a full board win would be worth 1000x your bet.

Theoretical return to player (RTP) of Lucky Staxx 40 Lines is believed to be 95.38%, and if it’s so, it would mean that this game isn’t paying too well. Consider this to be a high-variance bare bones slot playing experience in which you’re hoping for everything to align properly so you can get that big win, but most of the time this game will just be slowly eating through your bankroll. This is a difficult game to play, and only an experienced player will know how to make the most of Lucky Staxx.

Lucky Staxx 40 Lines is designed to be played by gamblers who like high variance games and who dislike bonus features as they believe the game of chance should only be about the main game and the paytable. If this is your cup of tea then you’ll like this slot game, and if it isn’t you just won’t no matter how hard you try. This is one for fruit machine players, and we could say the game gives this type of player what he wants. If only RTP would be a bit better, the slot game would deserve praise, though players who get that full board win won’t bother with technicalities and will simply enjoy their big win.

Lucky Staxx 40 Lines is a classic slot with fruit symbols and very little else, as only a Wild and a Scatter are present but there’s no free spins game. Align the stacks properly and you can win up to 1000x your bet on a single spin!

Hurray! There is a competition going between users of our site!
You have to do nothing, but browse out site, and win a daily prize. Click here to read more.
You current ranking:
Time Left: 16h 55m 2s
Gambling is for 18+ though some countries may have other restrictions...Remember you should always Gamble Responsibly
We use cookies to ensure that we give you the best experience on our website. If you continue to use this site you agree to allow us to use cookies, in accordance with our Terms & Conditions.Agree & Close