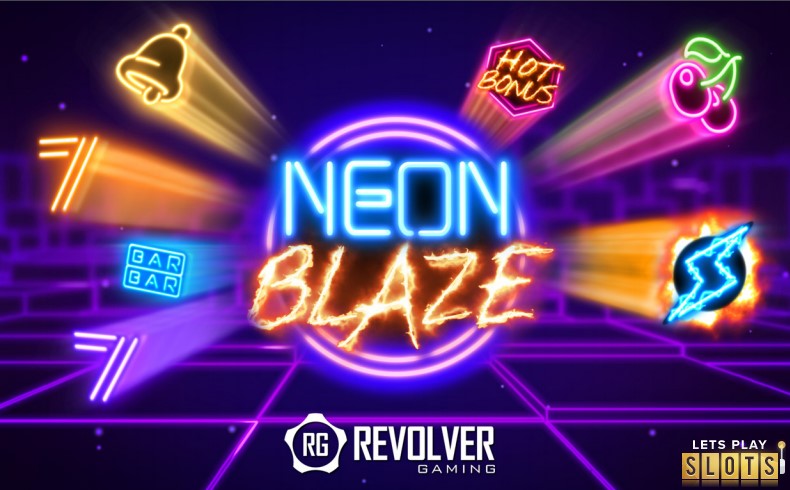 There are plenty of retro features in this Revolver Gaming slot, so why don’t you load up Neon Blaze and experience the Free Spins with Spreading Wilds, a progressive tiered jackpot and perfect 3D graphics?

I’ll be honest and say that I’m not altogether familiar with many Revolver Gaming slots, as I haven’t played so many before. As far as Neon Blaze is concerned though, I can say that I’m mightily impressed with it. This one knows how to bring the retro edge to your screen, featuring neon versions of traditional fruit, BAR and other symbols. Yet, it also injects a certain number of modern features into gameplay as well, like a progressive jackpot and freespins round. 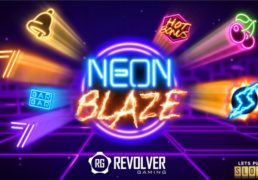 The setup of the game consists of five reels and three rows to spin, which is fairly standard for a video slot. It also has a total of 30 fixed pay lines in action, while your bets are changeable by using the relevant buttons from the inclusive menu. An autoplay function is also available to utilise in Neon Blaze.

As far as the visual side of the game is concerned, this is where retro comes into effect. The game takes place on what looks like a computerised grid from the 80s, and all of the symbols on the reels have been designed to match this theme, too. There’s an icon of a pair of cherries, the single, double and triple BAR additions and the golden bell. The number 7 is also present in blue, purple and orange colours. 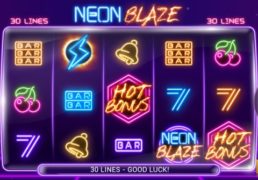 I was quite glad to see the special features come into effect in Neon Blaze as well. These ensure that your gameplay is enhanced to a supreme level of enjoyment. My favourite part about it is that there’s a huge progressive jackpot prize to win. This increases every time someone places a bet on the game and it can be won at random!

You’ll also find that there’s a scatter symbol, which will trigger the Hot Bonus matcher round. Playing through this feature will determine the number of freespins you’ll be given. During this feature round, Blazing Wilds come into effect, spreading their way across the reels to provide you with large pay-outs.

Of course, there’s a standard wild symbol in the base game too, which adds to the entertainment value of Neon Blaze.

It’s my opinion that Revolver Gaming has a great release on its hand with Neon Blaze. The graphics are of great quality, the gameplay matches this in quality and the special features make it a truly appealing slot offering from this developer.

There are plenty of retro features in this Revolver Gaming slot, so why don’t you load up Neon Blaze and experience the Free Spins with Spreading Wilds, a progressive tiered jackpot and perfect 3D graphics?

Hurray! There is a competition going between users of our site!
You have to do nothing, but browse out site, and win a daily prize. Click here to read more.
You current ranking:
Time Left: 1h 39m 19s