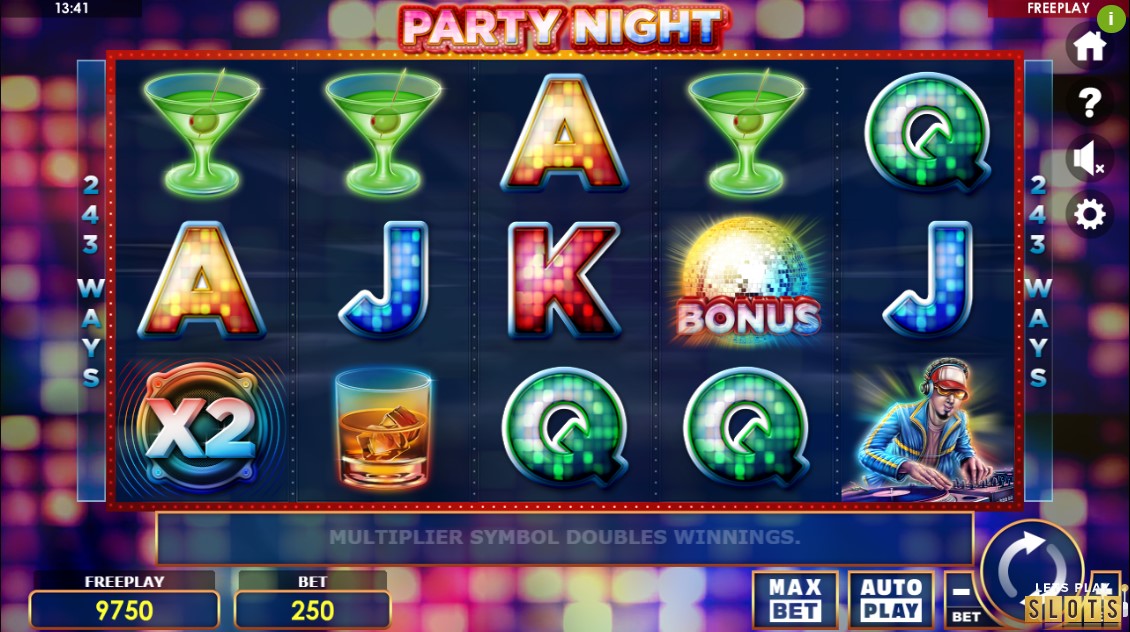 The music is playing, the lights are flashing, the dancefloor is packed. It can only mean one thing – Party Night! Playing this slot from Amatic Industries will allow you to experience 243 ways to win, Free Spins, Multipliers and much more.

Is there anybody who doesn’t love a good Party Night? Speaking personally, I’ve been known to bust a move on the dancefloor after a few shots of vodka. And if you’d like to live in such a way from home, then this Amatic Industries slot offering could do the trick. It takes you right into the heart of the party, with a DJ cranking out the records, disco lights putting you in the party mood and the whisky on the rocks flowing. 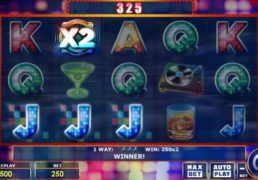 Amatic has created this slot game with five reels and three rows for its layout, which is quite the standard for video slots. Alongside this, there’s a total of 243 ways for you to win integrated into it. When it comes to the bet that you can place, you’re able to change this by using the plus and minus buttons at the bottom-right corner of the screen. There, you can select from bets between €1 and €500.

It’s always intriguing for me to see which developers utilise impressive graphics in their games, and Amatic has made sure to do so with Party Night. Disco lights can be seen in the background, while the lower-paying symbols of the game are present in the shape of playing card additions from J to A. A DJ’s turntable can be seen, which is able to reward you with up to €5,000 in total. A martini and a whisky on the rocks also appear as symbols. The DJ himself can also be seen as a symbol on the reels. The woman dressed in red acts as the highest-paying icon though. She’s able to reward you with up to €125,000! 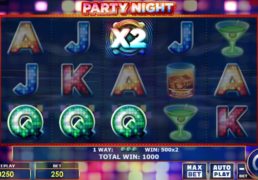 Party Night also has a great batch of special features for you to enjoy, too. First of all, you may see random multiplier symbols come into view on the reels. If one of these does show up and you create a winning combination at the same time, then the multiplier will apply itself to your pay-out for such.

There’s also the addition of a bonus symbol in this slot, which is the disco ball. If three or more of this icon appear on the reels in any position, you’ll activate the game’s free spins round. There’s up to 15 of these available to win, with additional ones being awarded if three or more scatters show up during the round. 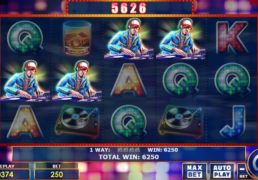 It would have been nice to have seen a few more inbuilt specialities appear in Party Night, speaking personally. The free spins round and the multiplier symbol are, of course, great additions. But, if I’m playing a game called Party Night, I want to have just that – enough fun to think I’m at a party. Graphically, Amatic doesn’t fail though, with high-quality, colourful designs shining through.

The music is playing, the lights are flashing, the dancefloor is packed. It can only mean one thing – Party Night! Playing this slot from Amatic Industries will allow you to experience 243 ways to win, Free Spins, Multipliers and much more.

Hurray! There is a competition going between users of our site!
You have to do nothing, but browse out site, and win a daily prize. Click here to read more.
You current ranking:
Time Left: 3h 5m 49s