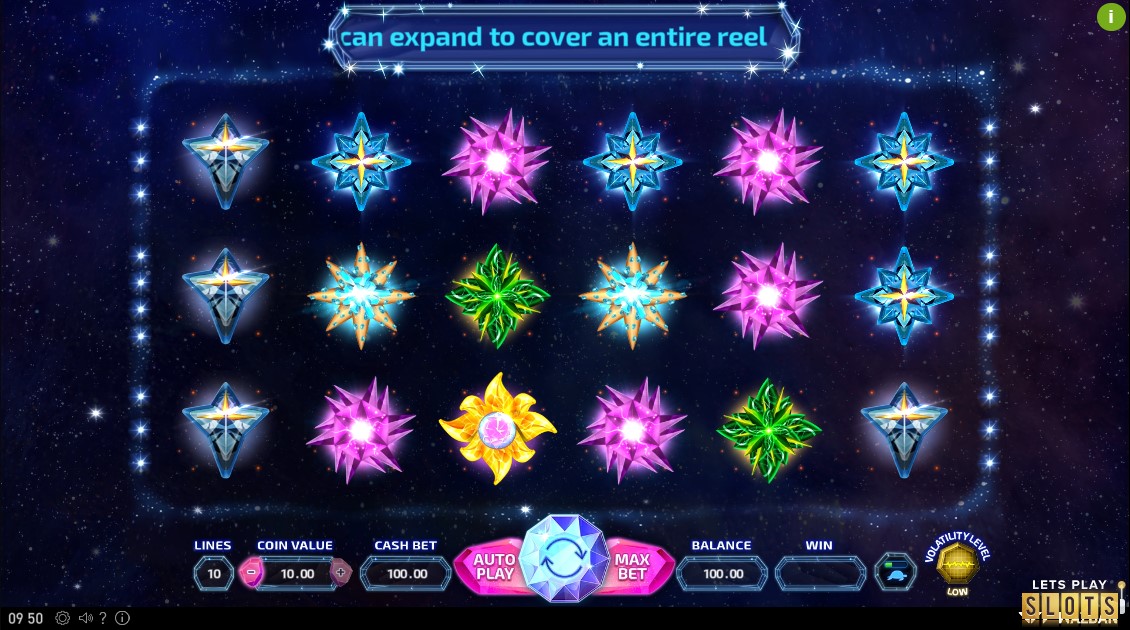 Space is calling, and it’s full of gems for you to see. This Space Gem game from Wazdan will make you want to travel there yourself, if only to experience its expanding wild symbol and entertaining re-spin round. 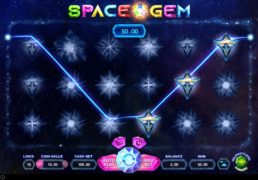 Imagine being catapulted into outer space and getting to see shiny, twinkling gems right before your eyes. Well, now there’s no need to go to that extreme. Instead, you can load the Space Gem slot from Wazdan up and spin its reels to get much the same effect. I’m always impressed by the strides that this developer makes to bring something new and intriguing out, although Space Gem does feel a lot like the Starburst game from Netent, it has to be said. 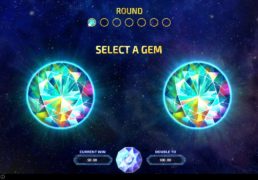 The layout of the game consists of six reels and three rows, so it’s a bit longer than a standard video slot interface. Across this setup, Wazdan has included a total of 10 pay lines to wager on, which are fixed in position. You’re easily able to select a bet from the bottom of the reels. The plus and minus buttons will allow you to choose an amount between €0.01 and €10 per line, meaning that a maximum bet of €100 per spin can be set in motion.

The imagery on the reels is all to do with shiny gems, which appear in different colours and shapes. The highest paying one of these is the red gem, which can reward you with up to €5,000 as a pay-out. Otherwise, there’s a yellow gem, a green one, a purple one and a sandy-coloured one, acting as higher paying additions. The two lower paying gems are blue in colour. 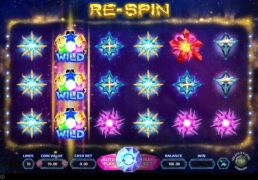 The additional feature of Space Gem that stands out primarily is the inclusion of a wild symbol. This features stars of all colours and will substitute for any other standard symbol on the reels, helping you to create wins. If it does show up, it will expand to cover the entirety of the reel that it is on, further increasing your win chances.

After the wild has expanded, it will set a re-spin off in motion. For this re-spin, the wild stack will remain in position, giving you the opportunity to create several more wins.

Finally, the game also includes a gamble round, which activates whenever you create a win on the reels. If you choose to play this, you basically have to select one of two large gems. Guessing right will double your winnings.

Even though there are plenty of similarities in this game to Starburst, I actually quite enjoyed spinning the reels of Space Gem. The graphics are a treat for the eyes and the inclusion of the expanding wild makes it that bit more entertaining. It’s not one that I would specifically play for hours on end, but it makes a great pit-stop between slots, shall I say?

Space is calling, and it’s full of gems for you to see. This Space Gem game from Wazdan will make you want to travel there yourself, if only to experience its expanding wild symbol and entertaining re-spin round.

Hurray! There is a competition going between users of our site!
You have to do nothing, but browse out site, and win a daily prize. Click here to read more.
You current ranking:
Time Left: 29m 55s