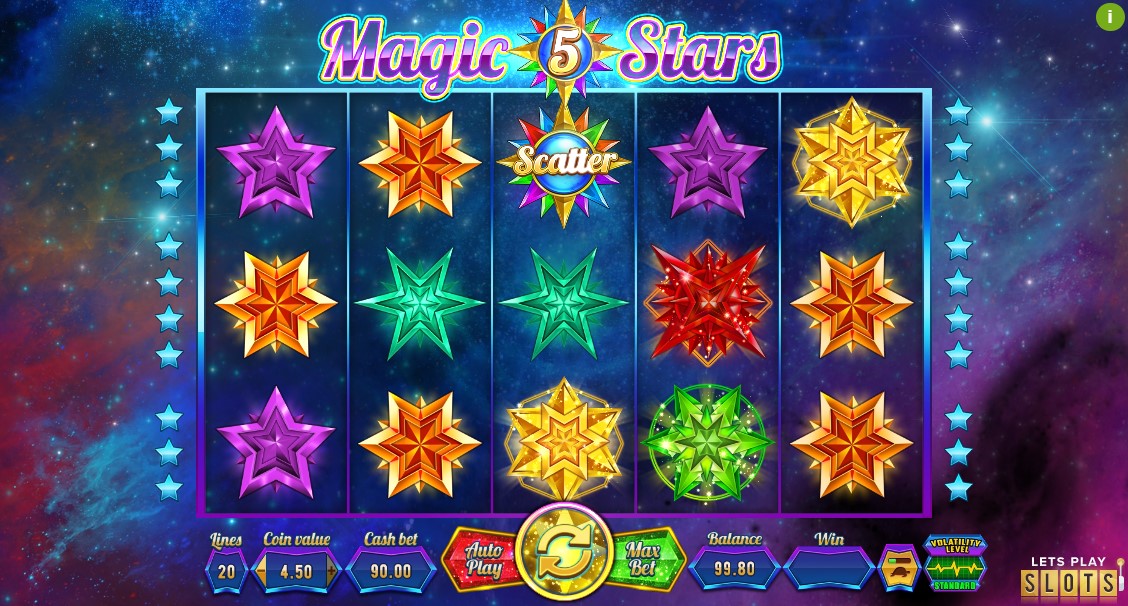 Stars will appear on the reels of this Wazdan online slot game, but they’re also the key to you winning big. The slot allows you to adjust the volatility level, speed up the spinning of the reels, and just make sure you on the look out for its Scatter symbol, too.

It seems like several developers have taken up the option to almost carbon copy the popular Netent game known as Starburst. And while Magic Stars 5 doesn’t simply and copy and paste that game, it’s not specifically that far away from being it. Now, whether or not you’re a fan of that slot as I am, is irrelevant. Wazdan has made sure to insert some intriguing graphics into the game, which stand out from the moment that you load it up. Yet, it seems to lack in terms of any really intriguing inbuilt features. 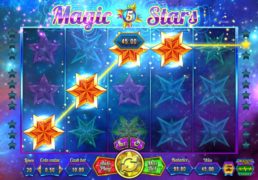 Magic Stars 5 has quite a standard video slot layout, featuring five reels and three rows. Across this layout, Wazdan has taken the opportunity to add 20 fixed paylines to the game. You have the option of adjusting the bet that you place on these lines, with the coin value being changeable between €0.01 and €5. This means that the maximum overall bet per spin in the slot stands at €100.

The graphics in Magic Stars 5 is probably the biggest standout feature of the slot. It will take you into an outer space scenario, with all of the icons appearing on the reels being in the shape of stars. Four lower-paying stars will provide you with pay-outs of up to €1,000, while two medium-paying ones provide rewards of up to €2,500. The red star is the highest overall though, giving you the possibility of receiving up to €25,000 as a pay-out. 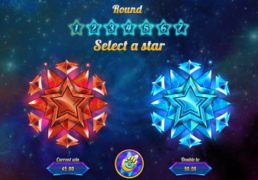 The main addition to this slot, other than its standard symbols, is the scatter icon. This one can show up in any position and if there’s three or more on display anywhere, you’ll get a win. Five of them in view across the reels can pay out up to €5,000.

Whenever you form a winning combination in Magic Stars 5, you’ll get the option of playing a gamble round. If you do play this, you’ll be presented with a red star and a blue one, and you simply need to select the right one to double your winnings. 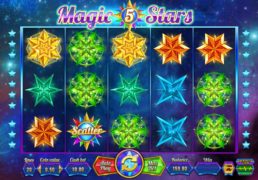 I’m all for the inclusion of such high-quality, appealing graphics that Magic Stars 5 clearly has within. Yet, the game really would benefit from having something more than just the standard scatter symbol. This slot doesn’t even have a wild icon for you to benefit from, which I’m certain that Wazdan could have rectified before its release.

Stars will appear on the reels of this Wazdan online slot game, but they’re also the key to you winning big. The slot allows you to adjust the volatility level, speed up the spinning of the reels, and just make sure you on the look out for its Scatter symbol, too.

Hurray! There is a competition going between users of our site!
You have to do nothing, but browse out site, and win a daily prize. Click here to read more.
You current ranking:
Time Left: 20h 34m 38s
Gambling is for 18+ though some countries may have other restrictions...Remember you should always Gamble Responsibly
We use cookies to ensure that we give you the best experience on our website. If you continue to use this site you agree to allow us to use cookies, in accordance with our Terms & Conditions.Agree & Close