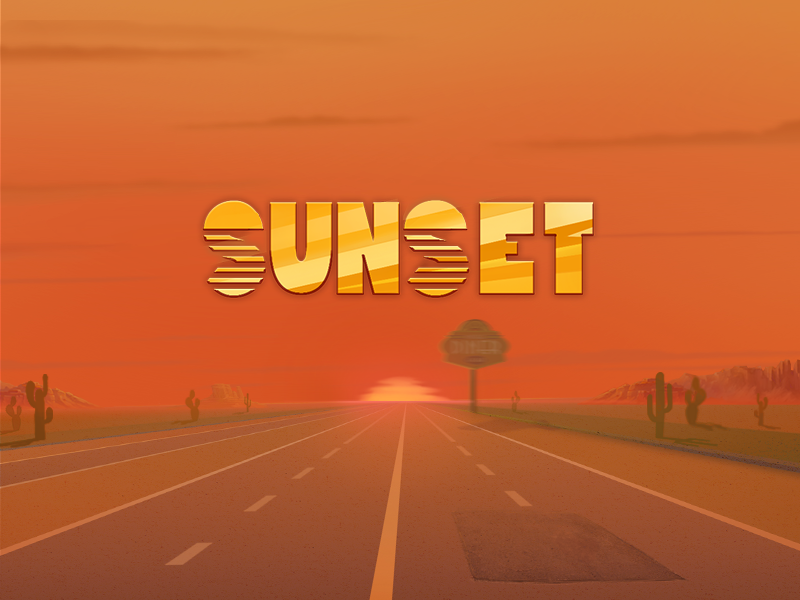 Sunset is a simple videoslot by SHTLM Gaming, released in December 2018. The slot machine offers high variance and some powerful symbols, as well as Nudging Wilds and an unlimited free spins game that’s played on a 5×4 board with 1024 ways to win! 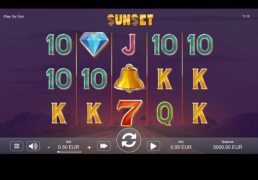 Sunset is really simple to play, and it will be liked by high variance slot players, while others probably won’t care about it. The theoretical return to player (RTP) is 96.58%, which is more than good enough, but the slot game somehow lacks the fun as it’s really very simplistic. I have played it for a few hours in order to write this review and there was a lack of action on the reels, despite the Nudging Wilds bonus feature. The game has high variance so you need to play a lot of spins in order to make the game pay up.

Sunset slot is played on a 5×3 board with 243 ways to win, and you pay from €0.25 to €100 to play. There are nine symbols plus a Wild and a Scatter. The five card symbols really don’t pay much, as the prizes for five-of-a-kind are either 1.60x or 2.40x your bet. The three medium-win symbols are much better, as the Bar symbol pays 10x your bet for five-of-a-kind, Bell pays 20x your bet, and Seven pays 24x your bet. With a four-of-a-kind win you can also make money on these symbols, from 2.40x to 5x. Diamond is by far the best symbol with a premium prize of 60x your bet for five-of-a-kind, so this is a paytable in which big wins are possible though rare, making Sunset somewhat of a high variance slot. 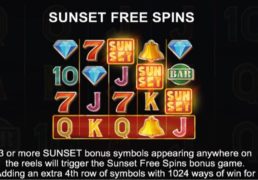 There are also two special symbols, the Wild and the Scatter. Wild always triggers Nudging Wilds whenever it lands on one of two top rows. What this means is that the reel with the Wild will be held for the next spin, it will nudge one position down. You still have to click Spin, it’s not a re-spin, but the reel with the Wild will be there. The Wilds don’t make much of a difference as the win frequency is very low in this slot machine, so even with a single Wild on the reel you likely won’t see a winning payline.

You need to land three or more Scatters to trigger the free spins game. You’ll get 8, 15 or 25 free spins for three, four or five Scatters respectively. During the feature, the fourth row will appear so you’ll be playing on a 5×4 board with 1024 ways to win for bigger wins, and this also means a Nudging Wild that starts from the top will move three steps and not two before it disappears. The free spins game can be re-triggered unlimited number of times. It is only during the free spins feature that the game finally loosens up and starts paying, because of that fourth row, and when it appears it can really do wonders for your winning paylines. There are also more spaces for those Scatters that re-trigger the free spins, so basically it feels as if this game should have been played on a 5×4 board, but you are playing the crippled 5×3 version until you land three Scatters. 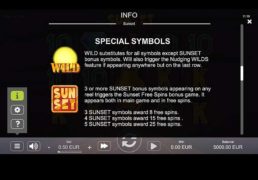 Sunset is a simple game without much going on, so it will probably be liked by players who prefer that kind of game, as opposed to ones which are action-packed. The game plays more or less like a classic slot, except that it has really good graphics and looks great on both desktop and mobile. There’s definitely value to be seen in the Sunset slot, and the only way to know for sure if you like it or not is to play it. It isn’t easy to find in online casinos, but if you like slots that are simple and that have high variance, Sunset is not a bad choice.

Sunset is a simple videoslot by SHTLM Gaming, released in December 2018. The slot machine offers high variance and some powerful symbols, as well as Nudging Wilds and an unlimited free spins game that’s played on a 5×4 board with 1024 ways to win!

Hurray! There is a competition going between users of our site!
You have to do nothing, but browse out site, and win a daily prize. Click here to read more.
You current ranking:
Time Left: 47m 57s