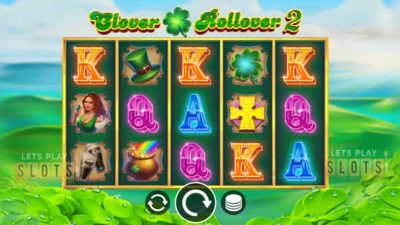 There are some slot games that turn out to be so popular that developers release a sequel to cater to the demand of slot players. A good example of this is the Clover Rollover slot. The original was released back in 2008 by Playtech and is still going strong after all these years. Now, an Australian developer called Eyecon is releasing a sequel to the original called “Clover Rollover 2“.

Players who are familiar with the original game should know what to expect when the green fields full of four-leaf clovers are shown. The background in the sequel is very similar to the original but the graphics are much better. The background track is that of an old Irish tune.

The game’s main grid is in the center of all of the greenery. It has five reels and three rows, along with only five fixed paylines. Even though the developer has imposed this limitation, it will not restrict players as they can now form winning combinations from anywhere in the grid, as long as they get three matching symbols on adjacent reels.

The symbols for this game are a mix of the card royals and thematic symbols. Players will want to get the thematic symbols as these are the higher paying symbols. Some of them include the four-leaf clover, the pot of gold, the two pints of “real ale” and the pretty redhead barmaid. The four-leaf clover is the most valuable symbol, since players can get 10,000 times their stake when they get five of it on a payline. But all of the other symbols have good enough payouts.

However, since the bets are low, they should not expect a big prize. Minimum bets start at 10 pence and max out at 10 pounds. This game is not for high rollers as there are no big prizes to be won.

Bingo audiences in the UK loved the original Clover Rollover because of its simplicity. Eyecon has preserved all of that in the sequel, which is why you will find none of the special features that you would normally find in a slot game.

This game does have system though. Players will have a chance at triggering a jackpot. There are three levels of jackpots: Mega, Maxi or Mini jackpot. This is that bit of spice thrown in to make things different from the original.

Overall, thanks to the graphical upgrades and the jackpots, Clover Rollover 2 is sure to beat the original.

Hurray! There is a competition going between users of our site!
You have to do nothing, but browse out site, and win a daily prize. Click here to read more.
You current ranking:
Time Left: 17h 56m 9s
Gambling is for 18+ though some countries may have other restrictions...Remember you should always Gamble Responsibly
We use cookies to ensure that we give you the best experience on our website. If you continue to use this site you agree to allow us to use cookies, in accordance with our Terms & Conditions.Agree & Close