Be Chivalrous In Knight’s Heart From EGT Interactive

Be Chivalrous In Knight’s Heart From EGT Interactive 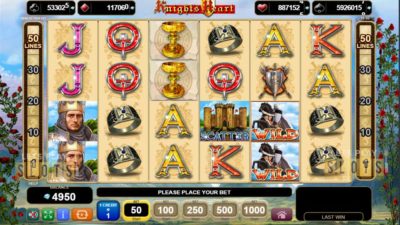 The knight in shining armor is often seen as one of the heroes of the Middle Ages. They had status and adoration all over the land and it was the dream of every damsel to be rescued by a knight. EGT Interactive has decided to use this as the theme of their latest slot and has built it around a romantic adventure where the knight showcases his chivalry and saves the damsel in distress.

The game takes place in the rose garden of a castle. The grid has rose bushes on prominent display on the side, while a pleasant valley is in the background. EGT misses out on the sound though, with only simple sound effects as the main background of the game.

As for the gameplay, the slot features a six by four grid for its main play area. There are a high number of paylines, reaching up to 50. Like all traditional slot games, players need a set of three or more symbols to get a win. Fortunately, all of the game’s symbols are related to the knightly theme. This includes the knight, his damsel, and then his weapons and silverware. There are also the traditional card royal symbols for the low-value wins.

The game doesn’t have a normal spin button either. It only has an “auto-spin” button. This means the game will continue one spin after another until you press the button again.

The game’s biggest prize is 1,000 times the player’s stake. This seems big but this game is a low volatility slot game. It may not seem exciting at first but the game makes up for it with its special features.

Besides the free spins, players can also gamble on every win. Players who get a winning combination are offered a chance to guess whether a card is red or black. If they take the challenge, then they can either double their win or lose it all.

Finally, the game is part of a progressive jackpot network. This means players have a chance at the Mystery Jackpot Cards Bonus. Players need to match three cards from a set of 12.

Overall, despite being a bit generic, the game is still pretty fun to play.

Hurray! There is a competition going between users of our site!
You have to do nothing, but browse out site, and win a daily prize. Click here to read more.
You current ranking:
Time Left: 6h 2m 55s
Gambling is for 18+ though some countries may have other restrictions...Remember you should always Gamble Responsibly
We use cookies to ensure that we give you the best experience on our website. If you continue to use this site you agree to allow us to use cookies, in accordance with our Terms & Conditions.Agree & Close