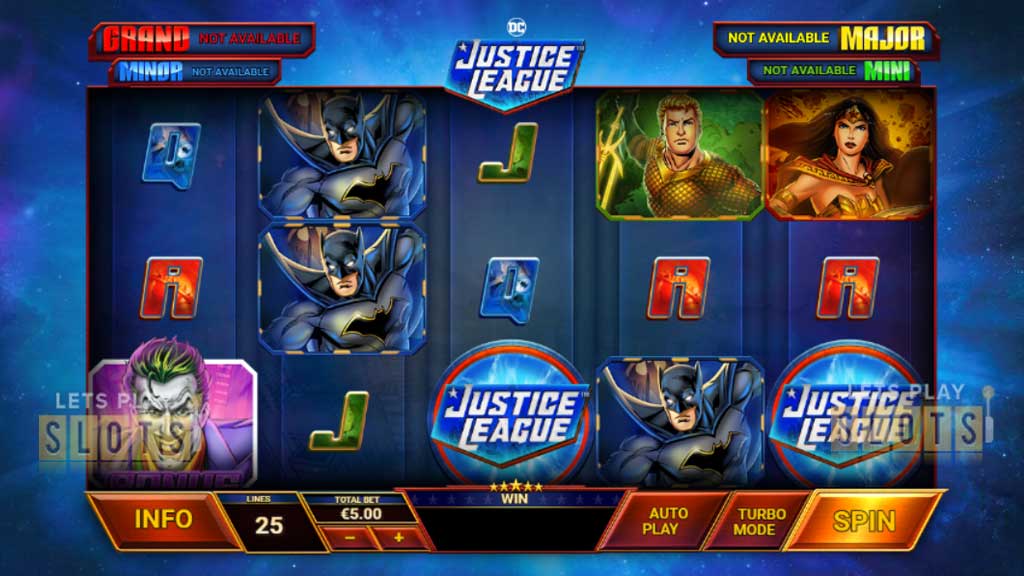 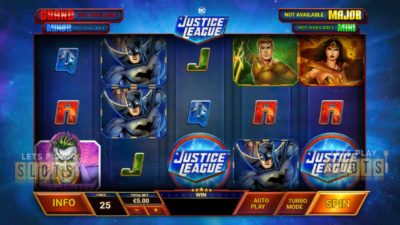 DC comics have a huge following across the globe and Playtech has decided to tap into this market by entering into a license agreement with the company.

Playtech has got the rights to the Justice League and has developed a new slot called ‘Justice League: Comic’.

This game continues the DC comic series of slot games which includes Batman & The Batgirl Bonanza & Green Lantern and mainly uses comic book art for its graphics. The game is rather basic in design and features five reels with 25 paylines. Players are aiming to score winning combinations of symbols just like all slot games.

The lower value symbols are the A, K, Q, and J royals. Players who want to get a bigger prize, will want to score one of four symbols. The symbols include Aquaman, Batman, Wonder Woman and Superman. The most valuable one is Superman, with players getting 40 times their stake when they score five of him.

The game also has a wild symbol with the pretty basic “WILD” text symbol. This replaces all of the other symbols in the game, except for bonus and scatter symbols. Players who get five wilds get 400 times their stake.

Players will have a chance at several bonuses. This is triggered when players score bonus symbols. In this game, they come in the form of the various villains which includes the Joker, Darkseid and Cheetah.

There are three bonus features that can be selected. The first one is the Mystery Symbol Bonus feature. Players get mystery symbols that appear on the reels, replacing the bonus symbols. Plus, the first three reels will be replaced with a 3×3 super symbol. Then the reels spin and all the mystery symbols will have the same symbol.

The next feature is Moving Wild Bonus feature. This will result in all bonus symbols become wilds. These wilds move one position to the left during the respins that players receive. Finally, there is the Coin Respin Bonus feature. This gives players a chance to spin with a special reel set that only has blank, coin and 2x symbols in play. The goal is to fill up as many positions as possible.

Besides these bonuses, there is also the Free Games feature. This gets triggered when three Justice League logo scatter symbols are scored. Players can get up to 20 free spins with a chance to get more free spins.

Overall, this game is pretty fun game for DC comic fans who should try it out when it comes to their favourite real money online casino.

Hurray! There is a competition going between users of our site!
You have to do nothing, but browse out site, and win a daily prize. Click here to read more.
You current ranking:
Time Left: 2h 42m 38s
Gambling is for 18+ though some countries may have other restrictions...Remember you should always Gamble Responsibly
We use cookies to ensure that we give you the best experience on our website. If you continue to use this site you agree to allow us to use cookies, in accordance with our Terms & Conditions.Agree & Close