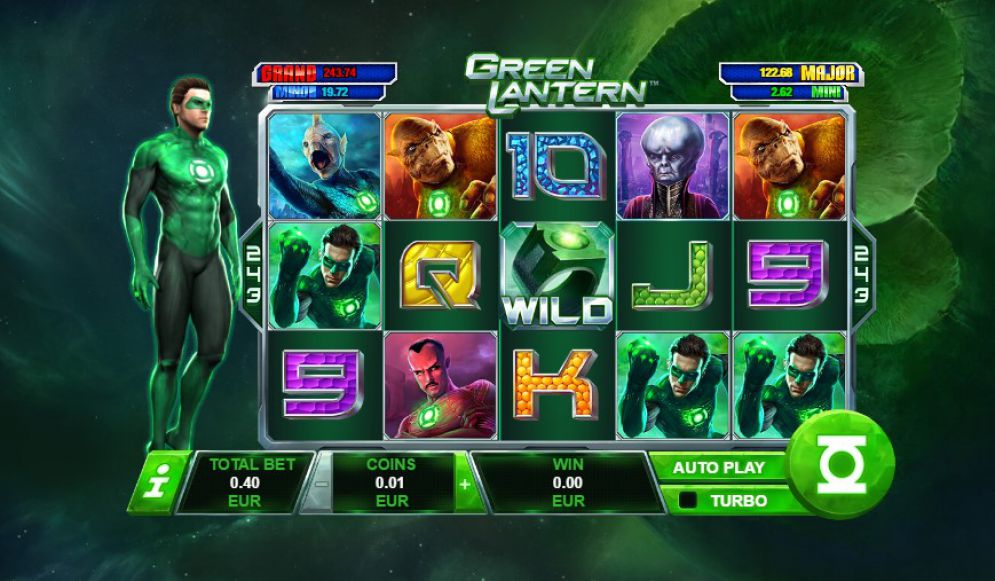 Green Lantern is one of DC Comics slots by Playtech, and it offers three randomly triggered bonus rounds with Stacked Wilds, Dynamic Win Multipliers and, of course, the DC Super Heroes Jackpot! 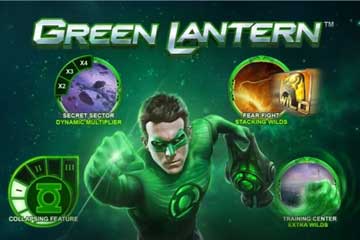 This 2017 slot machine by Playtech is officially licenced and is themed around the 2011 movie starring Ryan Reynolds, and all fans of the Green Lantern will love it. I have played it for a few hours and I believe I can give a detailed review of this slot game, so let’s have a look at its pros and cons.

While this slot game is a lot of fun to play, it is let down by low theoretical return to player (RTP), which only stands at 94.95% and a portion of that contributes to DC Super Heroes Jackpot as well, so you’re left with between 93% and 94%. This is the price of playing an officially licenced blockbuster slot game. The other DC Comics slots also have payouts around 95%, and some go up to 96%. Green Lantern is the worst of the bunch. 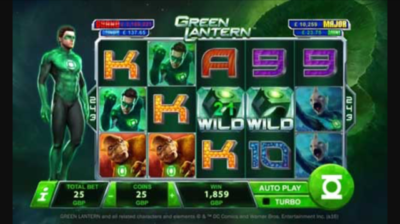 The game is played on a 5×3 board with 243 ways to win. The graphics are fantastic and you’ll love this slot if you’re a fan of Green Lantern, as symbols on the reels include Green Lantern, Guardian of Ra, Sinestro, Kilowog and Tomar-Re. The best-paying symbol is the titular character, and you’ll get 500 coins for landing five of these. There is a Wild symbol that appears on reels 2, 3, 4 and 5.

After you get a win, the winning symbols will disappear and will be replaced by new ones that fall from above, and which can then bring you new wins. This can go on and on, as in all similar games with the falling blocks mechanics. Every new win fills up the Power Bar, and if you get four consecutive wins on the same spin you’ll trigger one of three missions: Fear Fight, Training Center or Secret Sector. The Power Bar can be filled up to 1, 2 or 3, and this will affect the quality of each of the three missions. 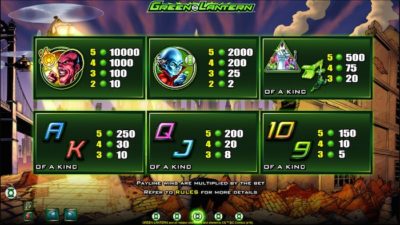 The missions are chosen randomly after you fulfill the triggering conditions. In Fear Fight Mission, all the symbols from the previous spin will explode except the stacking Wilds which appear instead of normal Wilds. You’ll get unlimited free spins and the game will end when the reels are covered with a certain number of Stacking Wilds, from 5 to 8, depending on how you triggered this game. Training Center Mission will give you 10 free spins with some extra Wild symbols, and Secret Sector Mission will give you 10 free spins as well, but with a dynamic win multiplier that starts at x2 and increases with every consecutive collapse. This is likely the most rewarding of the three missions, at least it was for me when I was testing the game. The dynamic multipliers can bring huge wins, and can do so much more easily than the other two missions.

All Playtech DC Comics titles have the DC Super Heroes Jackpot, and it can be won on any spin regardless of the bet size. Any bet can trigger the bonus game and you’re guaranteed to win one of four jackpots: Mini, Minor, Major or Grand. It makes sense to play a lot of spins with a smaller bet if you’re after this jackpot, as the quantity of spins is what increases your chances to win. The minimum bet per spin is $0.40, while the maximum is whopping $2000.

Green Lantern is one of DC Comics slots by Playtech, and it offers three randomly triggered bonus rounds with Stacked Wilds, Dynamic Win Multipliers and, of course, the DC Super Heroes Jackpot!

Hurray! There is a competition going between users of our site!
You have to do nothing, but browse out site, and win a daily prize. Click here to read more.
You current ranking:
Time Left: 15h 59m 20s