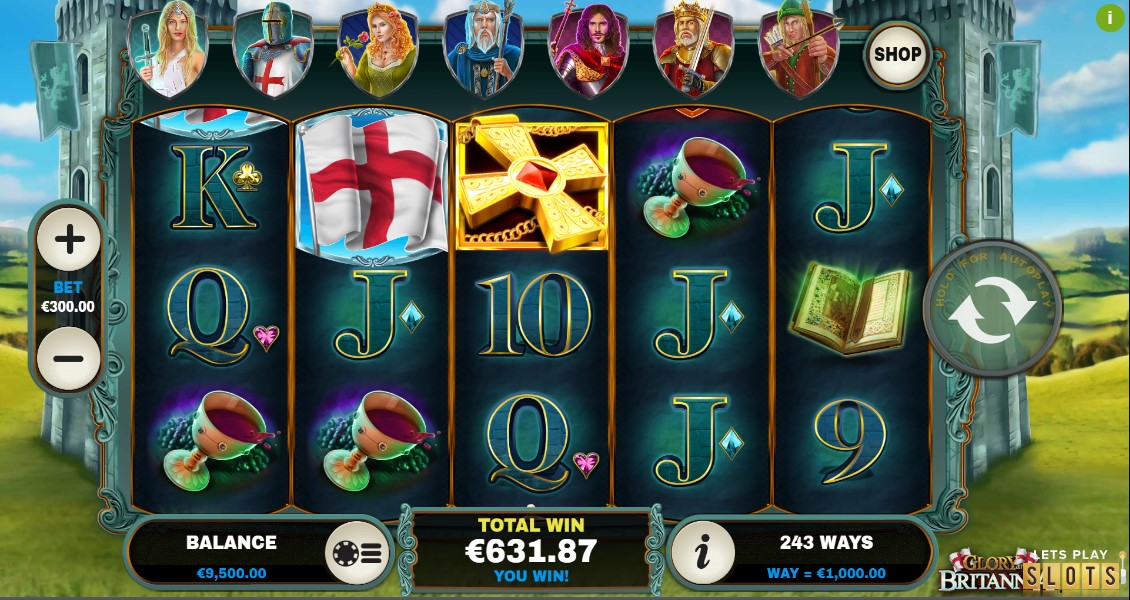 Follow the various characters such as Guinevere, Robin Hood, Merlin and more in their quest for Glory and Britannia. Experience multiple features for all of these characters and much more in this Playtech slot offering.

Best Casinos to Play Glory and Britannia for Real Money :

Glory and Britannia was always going to hold some sort of appeal for me, as I knew that it had been designed and crafted by Playtech before I accessed it. Once I did play the game, I wasn’t at all disappointed, getting to experience the developer’s usual thrilling high-quality graphics and some exceptionally compelling gameplay. Not only that, but the slot also has a mass of inbuilt features that just serve to make it all the more intriguing as you continue spinning its reels. 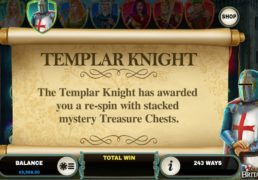 You won’t find anything untoward as far as the overall layout of Glory and Britannia goes. There’s a standard five-reel, three-row layout on display, and Playtech has also added a total of 243 ways to win into the game, too. You’re able to customise your wager in the slot easily, just by using the plus and minus buttons at the left-hand side of the reels. With these, you can choose from bets between €0.30 and €1,000 per spin.

As I noted earlier, the graphics of the slot are something to marvel at as well, with a grand castle being on display in the background. Then, upon the reels is where you will get to see the action take place. The symbols there start out with the regularly-seen playing card icons from 9 through to A. The K and A symbols can pay out up to €750. There’s also the symbol of the book and another of a ring. A goblet of win can also be seen, as can a crown on a purple cushion. The slot’s highest-paying symbol though, is that of the coat of arms. This can pay out up to €5,000 in winnings.

A wild symbol in the shape of a golden cross can also be seen appearing on the second, third and fourth reels of Glory and Britannia. This one will stand in for other standard icons, helping you to form winning combinations. 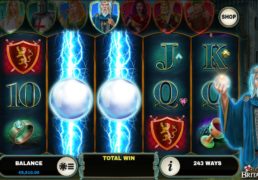 There’s plenty to behold in this slot, which is another reason that it appealed to me from the get-go. A scatter symbol in the shape of the English flag can trigger the slot’s free spins round, of which there are 15 to win. You need to spin three or more of the scatter symbol into view to activate such. During this round, an extra row comes into play, resulting in a total of 1,024 ways to win being in action.

You can also activate the seven additional special features for an extra bet of 10 credits per feature, by clicking on the images of the characters that exist across the top of the reels. Multiple side bet features can be won on one and the same spin and will trigger completely at random. They are as follows: 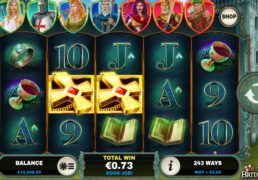 There’s a lot of fun to be had with this slot game, I found. Thanks to the inclusion of the seven character features and the free spins round, which merge marvellously with the impressive graphics, Glory and Britannia is certainly a thrilling part of the Playtech catalogue.

Follow the various characters such as Guinevere, Robin Hood, Merlin and more in their quest for Glory and Britannia. Experience multiple features for all of these characters and much more in this Playtech slot offering.

Hurray! There is a competition going between users of our site!
You have to do nothing, but browse out site, and win a daily prize. Click here to read more.
You current ranking:
Time Left: 21h 39m 24s