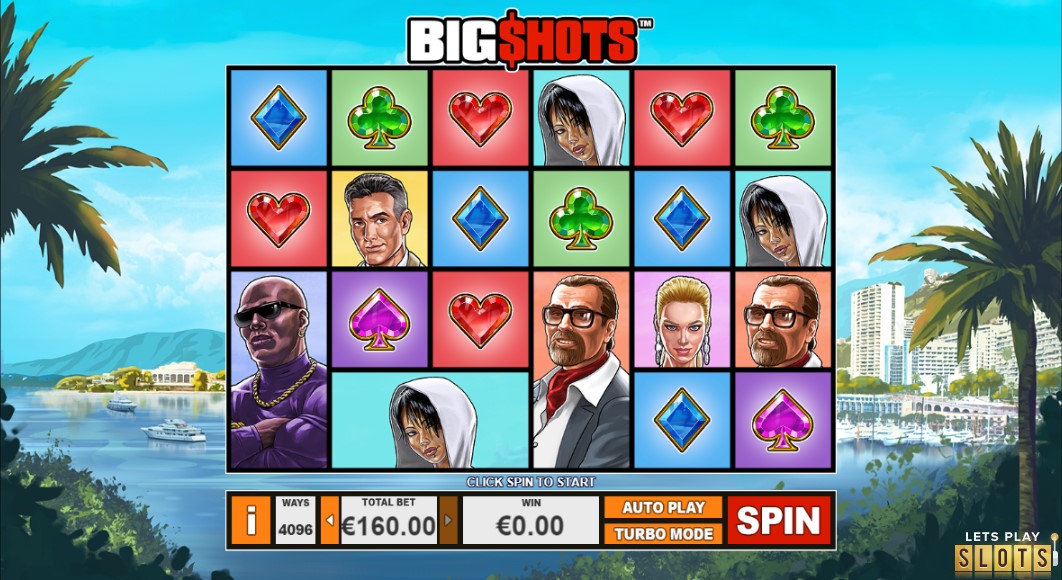 How do you fancy being one of the Big Shots? Well, if you follow the direction of the characters in this Playtech slot, you just might become one. As you spin, you’ll get the chance to witness Free Spins, a Wild symbol and Big Symbols for big wins!

Big Shots was always going to be a game that I wanted to play, for two main reasons. One, it’s a slot from the Playtech brand. And two, the trailer that I was exposed to brought the graphics and design of the game to the forefront. Of course, then when I eventually accessed it, there was plenty of gameplay to get through and various special features – all of which made the slot look all the more intriguing to play. 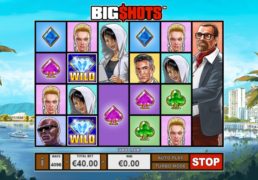 When playing this game, you’ll get to see a layout that features six reels and four rows in total. You’ll also get the chance to receive winnings from a total of 4,096 different ways. To add to this, you can alter the wager that you place by using the relevant arrows from either side of the “Total Bet” box. These allow you to pick a bet between €0.20 and €160 per spin. An Autoplay mode is also available to utilise as well.

The visual side of the slot makes it ultimately more appealing as well, providing you with a scene of a luxurious resort in the background. Then, the icons upon the reels start off with the standard playing card suit symbols of clubs, spades, diamonds and hearts. After these, the five actual Big Shots characters make up the remaining symbols, consisting of two females and three males. The highest of these can reward you with a maximum pay-out of 200 times the bet in play. 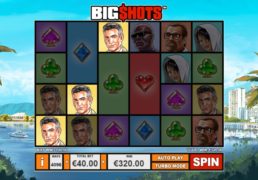 While you’re playing Big Shots, you’ll also have the chance to witness some bonus features coming into action. There’s a wild symbol on the reels of the game, which is visible in the form of the diamond. This one will substitute for all other symbols on the reels, except for the free spins icon. Six of the wild in a winning combination will provide a pay-out of 250 times your wager.

Speaking of the free spins symbol, this one comes in the shape of the photo of all five Big Shots together. If this symbol fills reels two through to five, then you’ll activate the game’s free spins feature. I was a little bit disappointed that only five free spins are provided in this round, but the good thing is that there aren’t any lower-paying symbols in the feature. Therefore, you will get higher wins when forming combinations.

One last thing to make a note of in regard to this slot, is that all symbols can appear in various sizes. Big symbols can show up on the reels which are 4×4 in size! 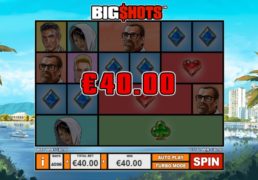 Overall, I was quite impressed by Big Shots as a Playtech slot game. It features the brand’s usual high standard of graphics and the overall gameplay is thoroughly appealing, too. Not only that, but the inclusion of free spins and the large symbols make it even more compelling while playing.

How do you fancy being one of the Big Shots? Well, if you follow the direction of the characters in this Playtech slot, you just might become one. As you spin, you’ll get the chance to witness Free Spins, a Wild symbol and Big Symbols for big wins!

Hurray! There is a competition going between users of our site!
You have to do nothing, but browse out site, and win a daily prize. Click here to read more.
You current ranking:
Time Left: 16h 16m 28s