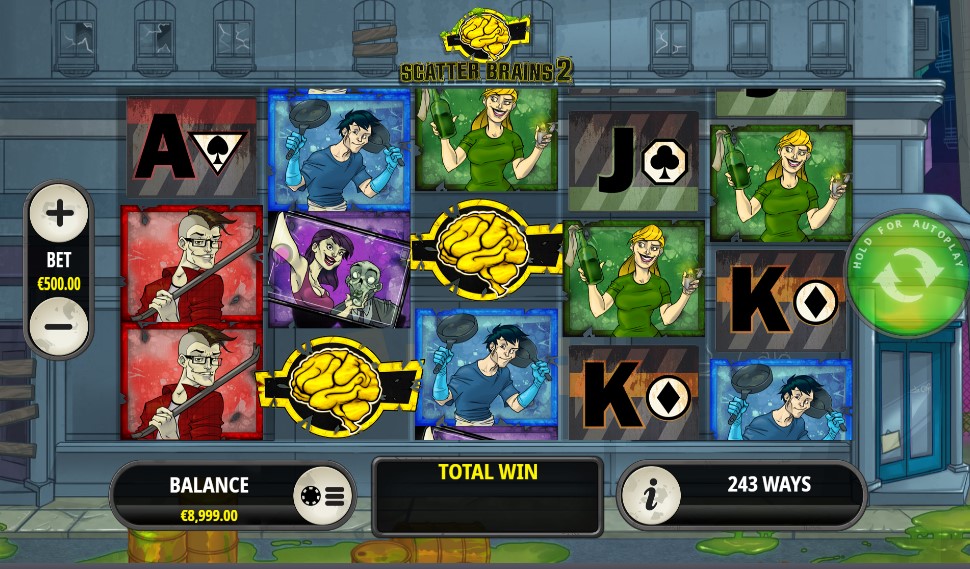 Scatter Brains 2 is a Playtech title and a 2019 sequel to the Geco Gaming slot from 2016. It’s a classic slot with a zombie theme, and a somewhat interesting free spins feature in which a Wild triples all wins.

Scatter Brains 2 is a 5×3 game with 243 ways to win, so there’s no payline selection here, you simply choose your bet from €0.10 to €500 per spin and that’s it. This is a modern classic slot and it’s adapted for mobile play, so it will look equally good on all devices. I’ve played on both mobile and desktop so I can vouch for that, and, more importantly, I can give a detailed review of this Playtech slot game.

There are nine symbols in the paytable, and four of these are card symbols while five are picture symbols with characters that might become zombies during the free spins game. The paytable is rather skinny as there’s no single powerful symbol that could bring big wins, so the best you can hope for on a single payline is a 6x your bet win. And it gets downhill from there, as the next best symbol pays 2.40x, and this gets down to 1.20x when you reach the fifth picture symbol, and the four card symbols can only give half of your stake back. 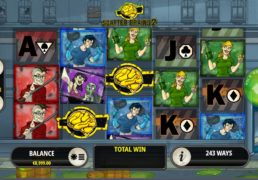 During the free spins, the symbols on the reels will be zombie versions of the five character symbols, but the payout is the same. One thing that’s different is the Feature Wild symbol, which replaces the Scatter, and that triples all wins it helps create. This is far too little for a main feature of a slot game, and it gets worse as you only get 5 free spins. 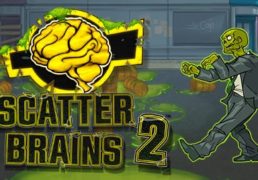 Theoretical return to player (RTP) is plain awful, 94.03%, so there’s no reason to play this slot game if you can help it. That’s the kind of payout that was common in classic slots before people started paying attention to theoretical payouts, and a slot game like Wheels n’ Reels, also by Playtech, is a superior choice to Scatter Brains 2. Also, if a game already has low theoretical payout, you’d expect it to be a high variance slot that offers a chance to get that super mega win. In Scater Brains 2, you can win 6x your bet on a single payline. The game would have benefited if it gave 10 free spins instead of 5, and if there was at least one powerful symbol in the paytable.

It seems Scatter Brains 2 is an attempt to cash in on the popularity of the original Scatter Brains game, but the original remains superior and is the slot game that you should play of the two as it has theoretical RTP of over 96%. There’s not a single reason to play Scatter Brains 2 for real money so you’d be better off choosing some other Playtech classic slots, they’ve released some good ones like Wheels n’ Reels, that incidentally came out in the same month when Scatter Brains 2 did.

Scatter Brains 2 is a Playtech title and a 2019 sequel to the Geco Gaming slot from 2016. It’s a classic slot with a zombie theme, and a somewhat interesting free spins feature in which a Wild triples all wins.

Hurray! There is a competition going between users of our site!
You have to do nothing, but browse out site, and win a daily prize. Click here to read more.
You current ranking:
Time Left: 17h 24m 56s