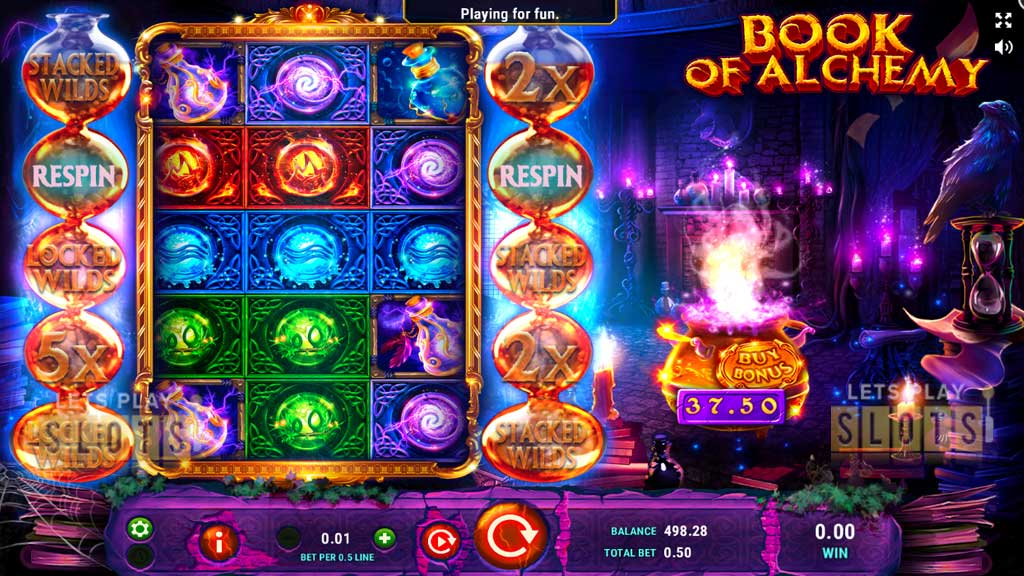 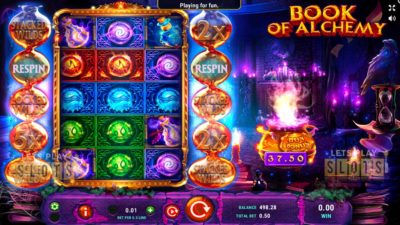 The magic of alchemy has long been known for turning lead into gold. GameArt Laboratory has used this as their theme for their latest slot game called “Book of Alchemy“. Players will be assisting the great wizard Remlin in his quest to unlock the secrets of the magical text and will try to see if they can come out with on the winning side with big prizes.

When players start this game up, they are taken to the magical laboratory of Remlin. It has all the signs of a magical room, with books and other paraphernalia. There are even glass spheres around the play gird. Players will also appreciate the excellent soundtrack that the game uses.

The game uses a grid with 25 paylines. In a surprising twist, there are three reels and five rows to play with. Additionally, GameArt used HTML5 to create the game so players would be able to access the game on any device. The symbols on the reels are mainly alchemical potions and more so card symbols to take people out of the theme.

The most valuable symbol of the bunch is the red potion, which rewards 500 times a player’s bet if five of its shows up. The game’s RTP is 96.15 percent. The game is highly volatile though so expect big wins.

The game also has a couple of special symbols. There is the golden cauldron which acts as the game’s wild. Players can use it to complete winning combinations. The game also has a scatter symbol in the form of the Book of Alchemy.

The game has some pretty wild special features. For one, players who want to activate them need for the glass spheres in both sides of the reels to match. This can mean that players can suddenly experience a bonus or two if they are lucky. These include things like stacked wilds and multipliers.

Players who get 3 Book of Alchemy symbols can get up to 10 free spins. During these free spins, players can get additional free spins and connect wilds.

Players who want to skip this part and find out directly what old Remlin is brewing can make use of the Buy Bonus feature. However, if you want to use this feature you must be willing to pay the current total bet x75. This game gets even more exciting as players have the option to gamble their winnings up to 5x!

So do check out this game and have fun when it arrives at your real money online casino!

Hurray! There is a competition going between users of our site!
You have to do nothing, but browse out site, and win a daily prize. Click here to read more.
You current ranking:
Time Left: 1h 51m 51s