Have A “Epic Holiday Party” This Xmas With Realtime Gaming 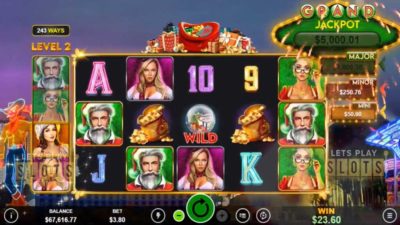 Realtime Gaming (RTG) is inviting players to a Christmas party to end all Christmas parties. The holidays are the season for players to enjoy themselves and this game takes the enjoyment to another level. Instead of the normal Christmas party, this one will be extra special as Santa Claus will be attending.

The action does not take place at the quiet North Pole. Instead, players are taken to the raucous Las Vegas Strip. Christmas is about having a great time and this game delivers on that premise.

When players start this game up, they are presented with a view of the Strip and the main grid is seen in the middle of it all. It isn’t alone though. There is a level meter at the side that keeps track of how much money players can earn. This level influences the rewards that the game has. The basic level has the lowest amount but players can raise it all the way to level four. On top of the grid is a presentation of all the game’s potential jackpots.

As for the grid, players will see a grid with five reels and three rows. There are 243 ways to win, making this a very generous game. The game has an interesting mix of symbols. There are the card royals which are the lowest symbols in the set.

Then there is Santa and his sexy helpers. Beautiful women will be helping Kris Kringle out and they are all on the grid. There are also three special symbols. One is the Wild, in the form of a bag of money, Next, there is a snow globe which is another Wild but with multipliers. Finally, there is the Christmas tree scatter symbol.

All three of the special symbols have something to offer. The normal wild is there to help complete winning combinations and can substitute for any normal symbol. It only appears on the three middle reels. Then there is the snow globe wild which only appears in the third reel. It acts similar to the basic wild but can add a multiplier for future wins.

Finally, the Christmas Tree scatters will give players 12 free spins, if three of them are scored. Additionally, no low-paying symbols will appear during these extra spins. The game also has regular and progressive jackpotsgreat Christmas themed slot.

Hurray! There is a competition going between users of our site!
You have to do nothing, but browse out site, and win a daily prize. Click here to read more.
You current ranking:
Time Left: 16m 57s