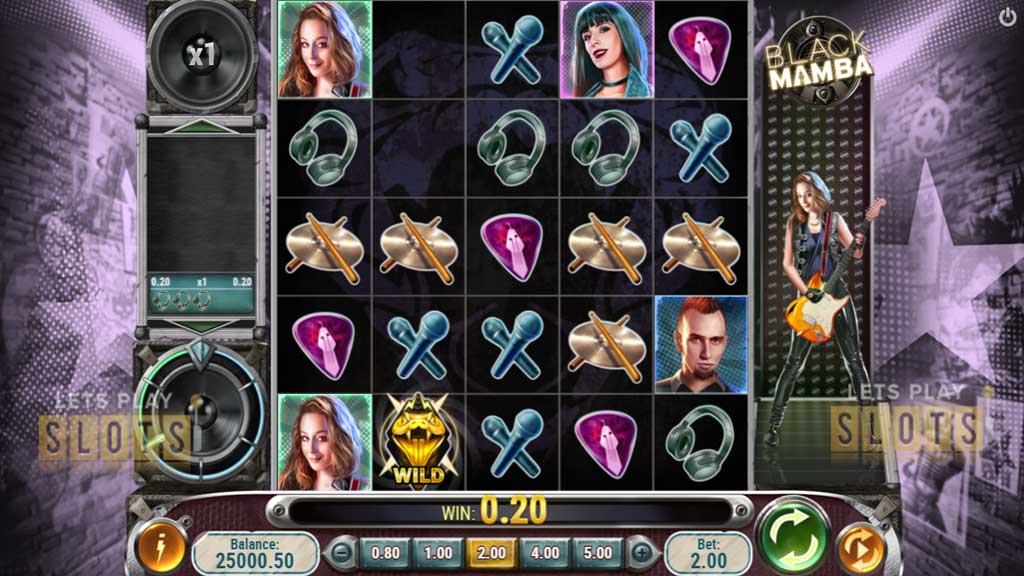 Italian Rockband “Black Mamba” Get Their Own Slot Game 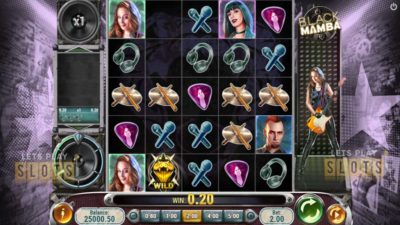 Most slot developers who create a musical themed slot, tend to develop a slot around a popular band or artist that is known around the world.

Play’n GO has decided to do things a little different by create a new musical themed slot around a popular Italian rock band called Black Mamba.

Black Mamba is a three piece band which plays a heavy sound. Play’n GO aptly titled their knew slot as “Black Mamba” and players are invited to rock out with the band and go on tour.

Players who don’t know the band will immediately be introduced to them as the game gives them a great into.

With a black and white background and posters of the band, the five by five grid will be where all the symbols of the game are featured.

The main symbols that players will see are the usual concert paraphernalia like microphones, headphones, guitar picks, and drumsticks which serve as the different symbols. These symbols are the low value symbols. Players will want to get the high value symbols featuring members of the Black Mamba band who are Alexandra, Cecilia, and Fred.

Besides the main symbols, there is the band logo and Martina, who is the lead singer of the band. Both of them are wilds but Martina provides a 2x multiplier. She is also the most rewarding symbol, with five of her giving players 50 times a player’s stake.

Players who are familiar with slot games will be confused with how this game works. Instead of the normal paylines, players will get a winning combination as long as they get three or more symbols in a row, either horizontally or vertically.

Besides that interesting winning mechanic, players will be able to enjoy the other special features that the game offers. One is the cascading reels. Players who win will see their winning symbols disappear and new ones drop. Besides that, a winning combination of three symbols converts into a wild symbol. For every win, a multiplier is added so that players can potentially win big from a single spin.

The game also has a couple of interesting bonuses. One of them is the Solo feature. This happens when players do not win a spin. Players can randomly trigger one of four potential bonuses, each represented by a band member. This can mean new symbols appear or some symbols become destroyed to potentially create winning combinations.

Players can also have the chance to get free spins. This happens when the entire grid is cleared out in a spectacular win. Players can then get potentially more free spins during the game. Overall, this is a fun game to play and deserves a spin or two.

Hurray! There is a competition going between users of our site!
You have to do nothing, but browse out site, and win a daily prize. Click here to read more.
You current ranking:
Time Left: 12h 29m 10s
Gambling is for 18+ though some countries may have other restrictions...Remember you should always Gamble Responsibly
We use cookies to ensure that we give you the best experience on our website. If you continue to use this site you agree to allow us to use cookies, in accordance with our Terms & Conditions.Agree & Close