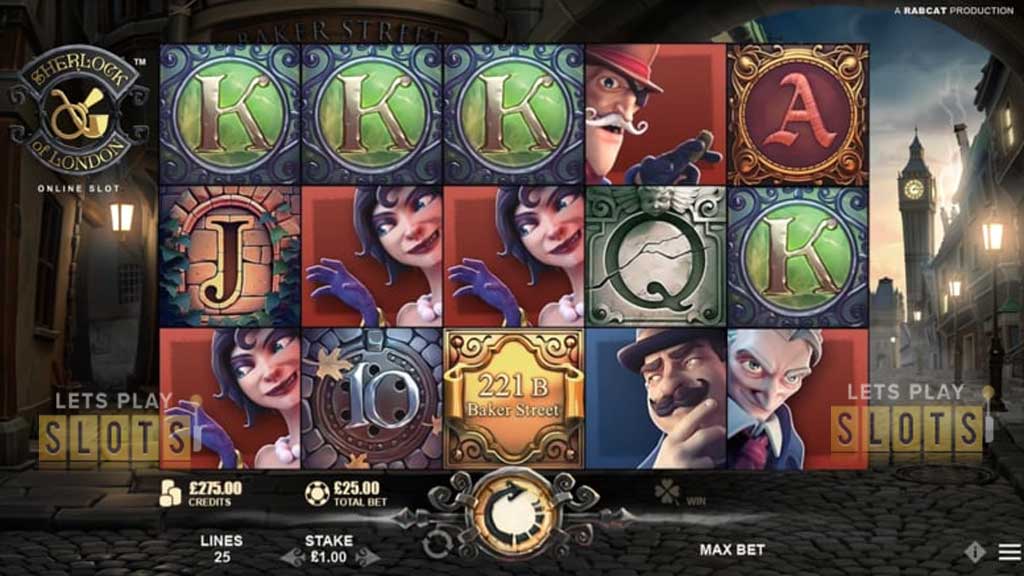 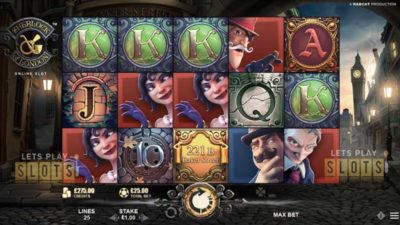 Arthur Conan Doyle’s Sherlock Holmes stories are a timeless classic and continue to be popular with kids and young adults all over the world. There have been movies, plays, books, and even video games about the Victorian detective for a close to a century now.

Rabcat Gaming is adding another slot game to the list with their newest offering “Sherlock of London“. This new game takes players to Victorian London as they assist the legendary Sherlock Holmes with his investigations.

When players start this game, they are greeted by the foggy streets of London which is set in the Victorian era. This is the back drop for the five reels and 25 paylines that this game features as its main play area.

The game has several low-value symbols. These are the A to 10 royals cards. There are also high-value symbols that are characters from the stories: Dr. Watson, Irene Adler, Inspector Lestrade and Moriarty. There is also 221B Baker Street sign. If players get five of this symbol, they get 40 times their total stake.

The game’s wild, which is Sherlock Holmes is just as valuable as the 221B sign. However, it also provides the extra bonus of being able to substitute for all the other standard symbols. It also is part of the several bonus features in the game.

For instance, if players land more than one wild in the same spin, the Connecting Wilds feature is activated. What happens is that all the symbols between the two wilds suddenly turn into wilds. Players can also double their win amount if they land two wilds to next to each other during a winning combination. This is the Double Win feature.

Holmes and Watson on the Case

The game also has bonuses that feature additional spins. The Bonus Spins feature is activated when players land a wild on reel one or two. The wild then locks into position as the players get one or two bonus spins.

The more profitable Free Spins is activated when the Holmes and Watson scatter symbol shows up and players get a minimum of three. They will then get 10 free spins. Instead of the Bonus Spins feature being active during these free spins, all wilds now expand to cover an entire reel. The Connecting Wilds and Double Win features can be triggered during these free spins. Besides this, the Dr Watson symbol becomes a second wild symbol though it does not activate the special features.

Overall, Sherlock of London is tricky, interesting and a lot of fun. If you like intrigue and mystery, give it a spin. If you looking for more Holmes action why not check out Sherlock: A Scandal in Bohemia by Tom Horn Gaming or Holmes and the Stolen Stones by yggdrasil

Hurray! There is a competition going between users of our site!
You have to do nothing, but browse out site, and win a daily prize. Click here to read more.
You current ranking:
Time Left: 5h 47m 11s
Gambling is for 18+ though some countries may have other restrictions...Remember you should always Gamble Responsibly
We use cookies to ensure that we give you the best experience on our website. If you continue to use this site you agree to allow us to use cookies, in accordance with our Terms & Conditions.Agree & Close