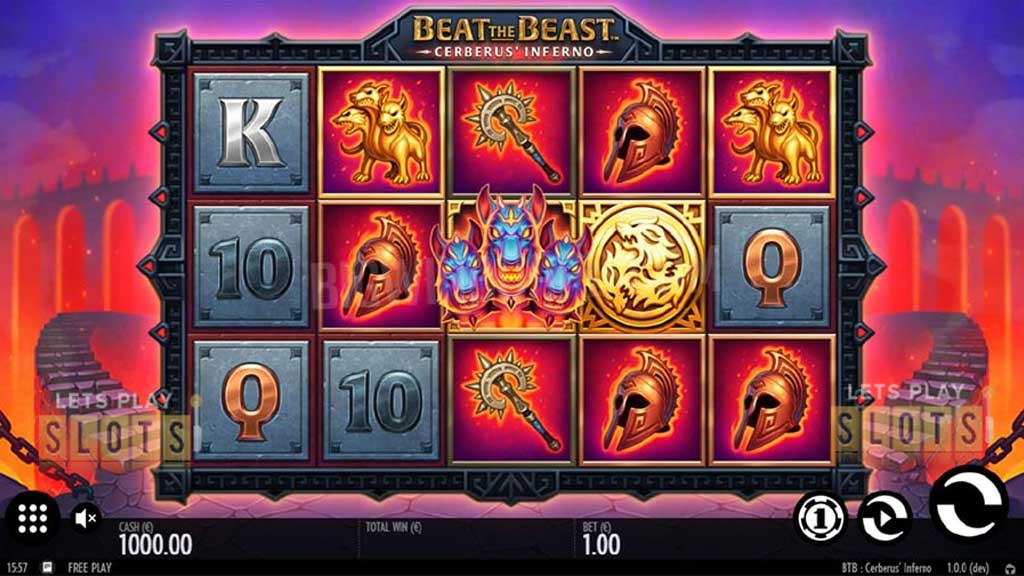 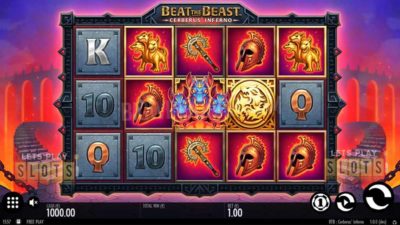 One of the unforgettable images of the Underworld is the three-headed dog, Cerberus. The hell hound is known as the guardian of the Underworld and he doesn’t let anyone in or out. As a great mythological creature, Cerberus has been depicted in various forms across the years. The latest one comes from gaming developer Thunderkick in their Beat The Beast Series called “Cerberus Inferno“.

In this game, players go down deep into the middle of the Earth, to face the mythical Cerberus. When players start this game up, they will find themselves in a fiery setting. Inferno is the right description since everything seems to be on fire from the deep red light of the flames. There is a huge stone platform flanked by a pair of stairs which is where all the action happens.

The game features the classic five reels and three rows set up. There are nine fixed paylines to work with which is lower than normal. The game does let players wager as high as 100 euros per spin so they have the option of putting a lot of money on their spins. The RTP for the game is a decent 96.15 percent.

As for the symbols, the game has the usual mix of card symbols for its low-value symbols. But for the higher value symbols, players will want to aim for various symbols from Ancient Greece. This includes helmets, vases, and scepters. There are even two special statues of Cerberus, which can bring the biggest prizes of the bunch.

Like all good slot games, this game also has a decent set of bonuses. For one, there is a basic wild feature. All slot games have a special wild symbol that can allow for easier wins. Usually, they can substitute all other symbols. For this game, there are two Wild symbols. There is the basic wild symbol that only appears as a stack, which is pretty good for players since it is an easy win.

There is also the Special Wild. This is the Golden Cerberus and acts as both a wild and a scatter symbol. Players who get three of these in a payline will be able to get 200 times their stake and even get 10 free spins. The great thing about the free spins is that instead of nine paylines, there are now 243 paylines. Players can keep on getting free spins as they play.

Overall, this game from Thunderkick looks fun and has big bonuses for players. Do give Beat The Beast: Cerberus Inferno slot or a few spins when you get the chance!

Hurray! There is a competition going between users of our site!
You have to do nothing, but browse out site, and win a daily prize. Click here to read more.
You current ranking:
Time Left: 22h 8m 35s