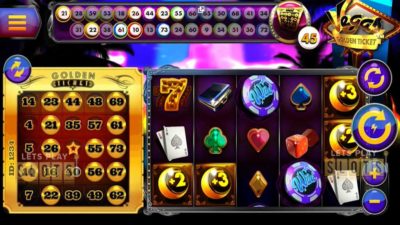 Las Vegas is often referred to as sin city as it offers all of the main vices that is common to man including gambling. Boasting some of the biggest and most popular casinos in the world, players have a wide range of games to choose from.

Mutuel Play decided to make a game that highlighted the fact that Las Vegas is a gambling paradise in “Golden Ticket Vegas“.

The developer decided to come out with a slot that allows you to play bingo while spinning the reels.

Players who start up this game will immediately get the Las Vegas vibe. The game presents players with the palm trees and neon lights right beside the reels.

The game then divides the screen into three sections: the reels, the bingo balls and the bingo ticket. The graphics look good and there is a cheery tune for getting players in the mood.

The grid is the standard setup with five reels and three rows. Bur besides the reels, every spin will have the bingo area coming alive. This is because 30 new balls are dropped every time, which will give players extra chances to win. If a number on the bingo ticket is revealed, then it is marked like bingo.

The game has a pretty low betting minimum of just 20 cents so players can start betting low and work up from that.

The real defining feature of the game is that the game combines slots and bingo. If a player doesn’t win with the slot portion, they can win the bingo part. The slot part of the game gives bonuses for the bingo part, with ball symbols adding extra balls to the draw. Players who win the bingo ticket can get up to 1,000 times their stake which can be pretty big. They can then get another ticket for another chance to win.

For the slots portion, players have a chance at winning free spins. If a player scores at least three Scatter symbols, they will be able to get free spins. The great thing about it is that the free spins increase the chances of a player winning on their bingo ticket. Instead of the normal 30 balls, players will get 35 bingo balls for every spin.

Overall, Golden Ticket Vegas is a nice little game that will keep players busy. The dual gameplay will take some getting used to but once you do, you are in for a fun time.

Hurray! There is a competition going between users of our site!
You have to do nothing, but browse out site, and win a daily prize. Click here to read more.
You current ranking:
Time Left: 4h 56m 11s