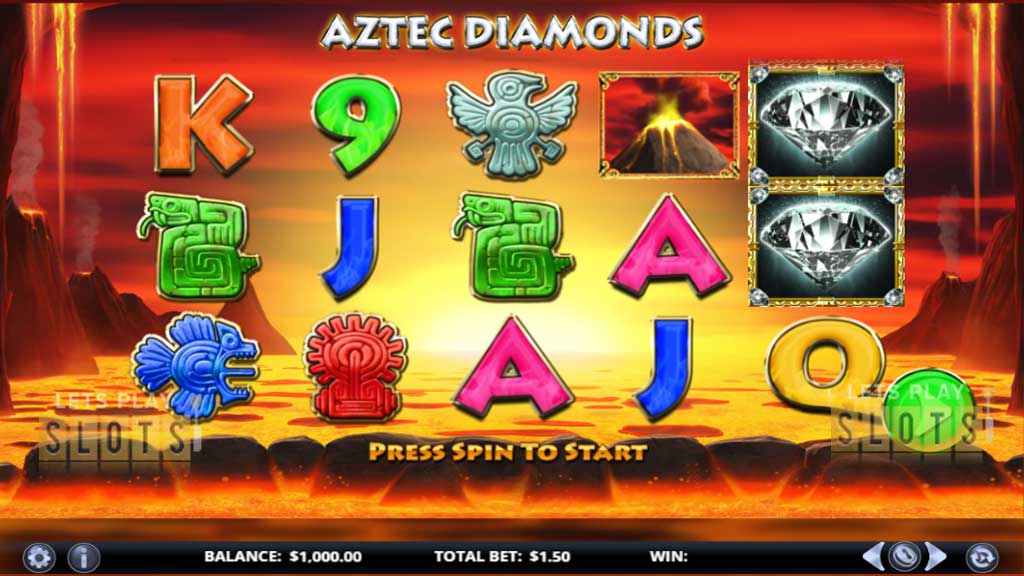 The Aztecs have fascinated people for years with their history and culture. One of the things that has always fascinated people were the Aztec stories surrounding hidden treasures that got lose when their civilization collapsed.

NextGen Gaming And GamesLab have partnered to release a new slot called “Aztec Diamonds” which gives players the opportunity to seek and find these hidden treasures.

Players are treasure hunters seeking to get their hands on some of those exotic Aztec diamonds. The way to do this is to score winning combinations on its paylines. This game has five reels and 30 paylines, enough to give players a sufficient challenge.

Set inside a lava-filled volcano, players will love the action-style soundtrack combined with the great visuals.

For gameplay, players will recognize the low-paying card symbols from the Ace to 9. Then there are four Aztec signs with each having different levels of bonuses. The most valuable symbol is the bird. When a player gets five of these on a payline, they will walk away with 16.66 times their stake.

There are also three special symbols available. There is the idol symbol that acts as the wild. It only appears in the last four reels. It will act like all other regular symbols in the game. The two other special symbols are the diamond and the volcano, both of which activate bonus games.

First, there is the Jackpot Diamond feature activated by the diamond symbols. Players do not need to get them on paylines. All that needs to happen is for six diamonds to appear in the reels after a spin. This will then give players three free respins, with the diamonds staying in place. All diamonds that appear will stay in position. At the end of the respins, players will get a prize.

Additionally, the diamond symbol can also potentially activate Jackpot Diamonds Expanding Reels. For this to happen, the diamonds need to land on each corner position. The reels will expand one time and they can get more respins. This is repeatable so players can have eight reels at the end of the bonus round.

Finally, players can also get normal free spins by scoring the volcano symbol. The more symbols, the more free spins. Players can get more spins and up to 100 times their stake during this bonus game. The Jackpot Diamonds feature can also be activated on these spins and give players bigger wins.

Aztec Diamonds is expected to be released before the end of this week.

Hurray! There is a competition going between users of our site!
You have to do nothing, but browse out site, and win a daily prize. Click here to read more.
You current ranking:
Time Left: 4h 49m 41s