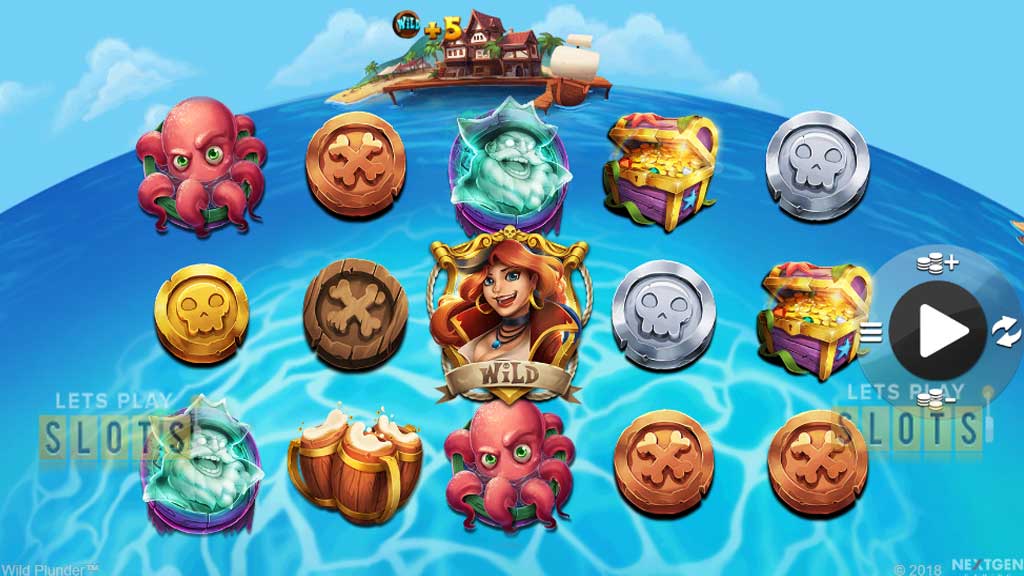 Jolly Rhonda is on the way to claim some booty in her new game Wild Plunder. Developed by NextGen, this pirate-themed game features some pretty good graphics and unique gameplay that will excite slot lovers. With five reels and 25 pay lines, players have a good shot at scoring winning combinations on this game.

As one of Jolly Rhonda’s crew, players are hoping to get winning combinations so that they can help find buried treasure. The cartoon style graphics and the oceanic background look great and provide a good backdrop for the adventure that the players are being taken on.

The game has coins as the low paying symbols, though they can give out 50 times their stake when five symbols of the same coin appear on a pay line. There are more valuable symbols though. This includes beer, treasure, seashells, and an octopus. The octopus is the most valuable giving out 350 times the stake if five of them appear in a winning combination.

However, this game goes beyond the basics. As every sailor knows, the weather can affect any sailing adventure. Behind the reels, the globe spins and randomly the Wild Currents feature can spin it as well. There are also a number of islands and when one of them stops above the middle reel, players get the bonus.

The adventure gets more exciting when Jolly Rhonda takes a hand in things. Jolly Rhonda’s symbol acts as a wild. This means it can act as other symbols for winning combinations. However, it does have special effects attached to it.

If two or more wilds come together, the Wild Spins feature is activated. All adjacent high-value symbols become wilds and players get a respin. During the respin, the wilds will move across slots so there are more chances of winning. Players will also like the fact that the respin can be triggered again. It helps that a single Jolly Rhonda symbol may trigger a free respin – with the wild being held in the same position.

Another interesting feature that players will like is the Release the Kraken feature. This activates randomly during any base spin so players should not be surprised when the Kraken shows up and randomly replaces a number of symbols with Jolly Rhonda. This can significantly boost a player’s chances of winning.

Overall, Wild Plunder is a fun and enjoyable slot with some great gameplay.

Hurray! There is a competition going between users of our site!
You have to do nothing, but browse out site, and win a daily prize. Click here to read more.
You current ranking:
Time Left: 4h 42m 36s