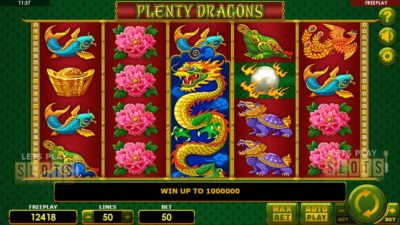 The name of the game makes it rather obvious that it has an Asian theme to it. When players start this game, they will be confronted with a background that is full of dragon scales which goes well with the theme. The grid itself is dominated by the colors red and gold which enable the game’s symbols to stand out.

Plenty Dragons uses the standard grid size of five reels and three rows but gives players a better chance than what is provided by the standard paylines. There are 50 active paylines in the game so players have a pretty good chance to trigger then and win. This game has an RTP of around 95 percent.

The theme of this game resonates with the symbols. The game has all the traditional Chinese symbols for luck and good fortune. This includes phoenixes, dragon turtles, frogs, fish, golden ingots and pink flowers. The game also has the classic Asian dragon as its wild symbol. Along with the Pearl Scatter symbol, they make up the two most valuable symbols in the game.

Players can bet large in this game. They have a choice of wagering from 10 to 10,000 coins on every spin. They can potentially win up to 20x their stake on a basic spin, while really lucky players can get 1,000x their bet.

The game has some pretty cool features. The simple one is the wild symbol. When the dragon symbol appears, it can replace any regular symbol when getting a winning combination. The great thing about it is that the dragon appears as a stack. This means there is a good chance of the wild triggering.

Lucky players will be able to land one of these symbols as part of a five of a kind combination. These five of a kind combinations will give out 20x the player’s stake. But when the Wild symbol is part of it, the reward is doubled. The other special symbol is Pearl Scatter. Unfortunately, players don’t get free spins in this game. Players who score the pearl can only get a large bonus o up to 25x their stake.

Do give Plenty Dragons a couple of spins when it arrives at your favorite online casino!

Hurray! There is a competition going between users of our site!
You have to do nothing, but browse out site, and win a daily prize. Click here to read more.
You current ranking:
Time Left: 13h 1m 17s