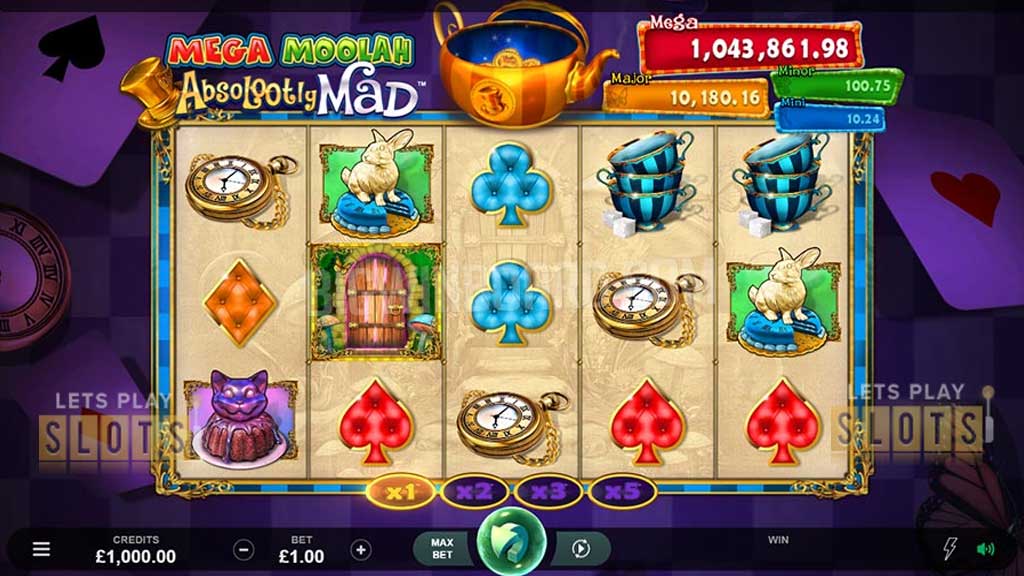 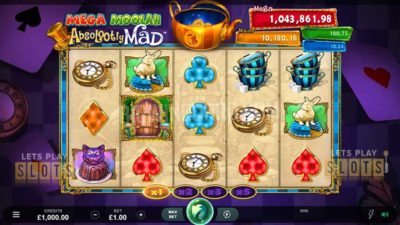 The Mega Moolah brand is very popular with jackpot lovers from all over the world. The progressive jackpot series has some very popular offerings, each with its own theme. Microgaming has come to appreciate the advantage of having a brand series that draws players in. The latest slot in this series is from Triple Edge Studios and is designed exclusively for Microgaming. This time around, the theme revolves around the classic children’s tale, Alice in Wonderland and players will go “Absolootly Mad“.

When players start this game, they will immediately recognize the Mega Moolah brand and will take some time to recognize the characters of the fairytale Alice in Wonderland as it takes a while for them to show up. The first hint is the mushroom-filled garden in the background as the five reels of the main play grid shows up. Players will have 243 ways to win when they start spinning those reels.

Players will be seeking to get winning combinations of symbols. The lowest value symbols in the game are the card suits. Players will want to aim for the more valuable symbols. This includes pocket watches, butterflies, teacups, Cheshire Cats, Hats and Mad Hatters.

All About The Jackpot

But players who spin the wheels of Absolootly Mad Mega Moolah are not playing for the low-level wins. Anyone who plays a Mega Moolah game does so for the potential jackpot where they can win millions. Progressive jackpot games network in the Mega Moolah series take into account all of the various slot games and have them contribute to the final pot. So every time a player spins the reel, the Mega Moolah jackpot increases.

Players will have a better chance of winning these jackpots with the special features of the game. There are the wild symbols which make it easier to win by substituting for winning symbols. Additionally, players can trigger the Rolling Reels feature, which removes winning combinations and provides win multipliers. There is also the free spins feature that is triggered when three or more scatters are scored. Players can get eight free spins initially and they can get more later on in the game.

Finally, the Jackpot Wheel shows up out of the blue, though players who get more wilds have a higher chance. Players have a shot at one of the four jackpots: Mini, Minor, Major and Mega Jackpot. This is new slot is expected to hit online casinos in the month of May!