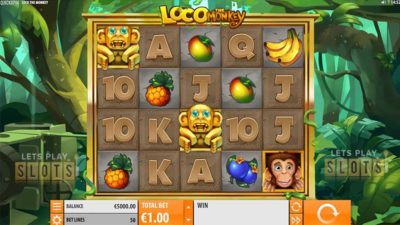 “Loco The Monkey” is the latest slot game from Quickspin that pushes the cute theme of slot gaming.

While it is mainly adults who play slot games, a lot of slot developers continue to use cartoonish characters as there is a specific market segment that enjoys these games.

In this game, players will be guided by Loco the Monkey through the jungle in search of big prizes.

Players are immediately presented with the grid that has the jungle in the background. There are five reels and four rows to play with along with 50 paylines.

The betting range is also impressive as it starts at $0.25 and going all the way up to $100. This betting range makes this slot suitable for new players, mid stakes and also high stakes players who don’t mind the cartoonish theme.

The symbols in this game are a nice mix. There are the card royals for basic wins and the fruit symbols as the higher paying symbols. They include pineapples, bananas, limes, blueberries and mangoes. The most valuable of the bunch is the banana. It pays out 10x the player’s bet for a combination of five.

The game also has a number of special features. Players have two chances at making something special happen. The first one is via Loco The Monkey who acts as the Wild. He only appears in the three middle reels. There is also the Golden Monkey, which acts as the scatter symbol.

There are additional special features to trigger. For one, players can get a respin if four or more Loco The Monkey symbols appear on the grid. This activates the More Monkeys respin feature. The monkeys are locked into place and then another spin is done to get a more profitable win. The great thing about it is that the fifth reel now produces Wild symbols and any new Wilds that appear will give players another spin.

Hurray! There is a competition going between users of our site!
You have to do nothing, but browse out site, and win a daily prize. Click here to read more.
You current ranking:
Time Left: 9h 28m 56s