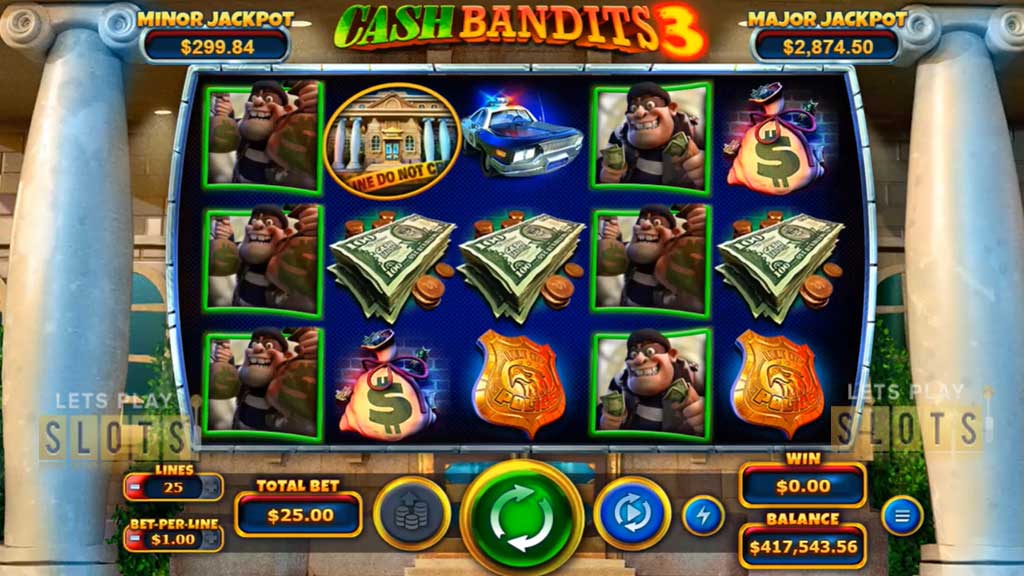 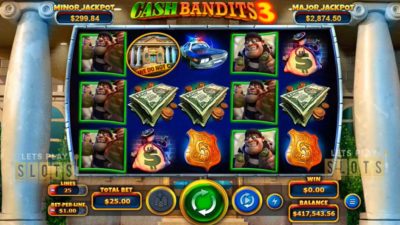 For those who had great fun with the charming thieves of “Cash Bandits” and “Cash Bandits 2“, there’s some good news on the horizon. Real Time Gaming has decided to release the third installment in the series. Players who loved the thieving fun that the first two games should be happy that the game is back and better than ever.

Players of the original games will quickly recognize the game’s theme and the original quirky bandits are once again back in action. For newcomers, the game presents people with a cartoony and easygoing style that should appeal to those who just want to have some fun. The background is a bank with two tall pillars on the sides and this is the latest target for the bandits.

The gameplay itself should be familiar and the soundtrack keeps things interesting from start to finish. The five reels and three rows of the grid are rendered in the familiar Cash Bandits style and have 25 paylines for players to win on. The game’s symbols are all thematic and include robbers, policemen, police badges, police cars, doughnuts, handcuffs, banks and money. The betting range starts at a low $0.25 and goes up to $25.

Play is made quick and easy with the Turboplay and the Autoplay options, which allows players to just leave the game to spin on its own.

The appeal of this game is in the special features though and they are pretty good since they can raise a player’s win to 115,000 times their stake. The first special feature is the familiar Vault. This determines how many free spins a player can get and how big a multiplier they receive.

This is triggered by scoring three Game Logo scatter symbols. That is just the beginning though. Players will then be tasked to break into six different vault doors. Depending on the player’s luck, they can get up to 390 free games with x23 multipliers.

The second special feature is something that can help players win. The Robber symbol is the wild and he can make spins that are not quite winning into sudden prize winners. The symbol is present all throughout the game so players should aim for it.

Overall, Real Time Gaming has done well with the latest Cash Bandits game. The return of beloved characters only makes this game even more special and fans will enjoy it.

Hurray! There is a competition going between users of our site!
You have to do nothing, but browse out site, and win a daily prize. Click here to read more.
You current ranking:
Time Left: 12h 44m 29s