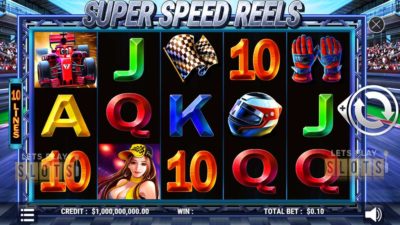 Slot Factory is known for churning out some really cool slots and the developer has done it yet again with its latest release. Races are a popular with millions of people all over the world. Many of these racing fans will love to have the opportunity of racing and experiencing the thrill of speed.

Slot Factory decided to give them the opportunity to do so with “Super Speed Reels“. In this game, players get taken to a F1 race track and will then race to get to the finish line.

Slot Factory decided to use cartoon designs to make this game amusing and has done a great job with the graphics. The main focus is the grandstands full of spectators that are waiting for the race to begin.

The grid itself is the focus of the track and players. It has the standard five reels and three reels for most slot machines. It only has 10 fixed paylines though. The RTP results are around 96 percent which is pretty good. The medium to high volatility makes it attractive though since players can get big wins.

As for the symbols, the game features a decent mix. There are the low-value card royal symbols from A to 10. But players who want big wins will want to score the racing gloves, helmets, flags and women. The game also has the Formula One symbol as the game’s Wild and Scatter symbol at the same time. For normal wins, the biggest that players can get is 5.141x their bet. But the real excitement comes from the bonuses.

To The Finish Line

The Formula One symbol can help greatly with wins. Acting as Wilds, it can replace any of the symbols to help with winning combinations. But if players get three or more scatters, they can get free spins.

During these free spins, players have ten free chances to score big. The game is going to help them by picking one symbol randomly. At the end of the spin, that symbol will expand across the reel, which adds another layer of helping with the win.

Besides that, players can be lucky enough to score the Formula One symbol again. If this happens, they can get 10 more spins for the prize. Overall, Super Speed Reels provides players with an interesting experience. Those who want to get some excitement on the F1 track will love spinning the reels on this one!

Hurray! There is a competition going between users of our site!
You have to do nothing, but browse out site, and win a daily prize. Click here to read more.
You current ranking:
Time Left: 12h 40m 48s