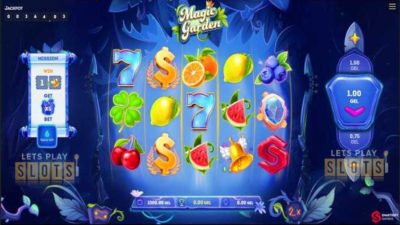 Smartsoft Gaming has done well with its latest slot offering called the “Magic Garden“. In this game, players are taken to a magical garden where they can win big prizes and enjoy the scenery. The blue fox will be helping them all the way.

The Magic Garden presents it all in beautiful detail as the developers have done a great job with the graphics and the background sound. The background is mainly the garden, while a fox stands by the reels to help players with their quests.

The Magic Garden presents players with five reels and three rows for the grid. There are only five pay lines for the game so it is a bit limiting. The bets are a bit limited.

The maximum amount is limited to $50 so it will not be a hit among high rollers for sure. The minimum amount is set at $0.05 which is perfect for those with a limited bankroll.

The symbols for the game are a mix of fruit symbols which include oranges, lemons, plums, cherries, watermelons, and more. The most valuable of the set is the Blue Seven symbol. It gives players 1000x their bet, if they score five of it on a payline.

When it does appear, it and a randomly chosen symbol will become Wild. This means if there are five cherries on the grid and it is selected, players will get five wilds. One special feature that players won’t see anywhere else is the Lucky Boxes. Every time a player spins the reels, three random spots will be chosen to be lucky boxes. The game randomly assigns odds to them and multipliers. If a player scores using the lucky box, then they get the corresponding prizes.

Finally, players have the gamble feature to make the game even more interesting. Every win can be doubled, if players are willing to bet their win by guessing whether a card is red or black. If you get it wrong, you lose everything.

The Magic Garden will be great for new slot players and for those who have a small bankroll.

Hurray! There is a competition going between users of our site!
You have to do nothing, but browse out site, and win a daily prize. Click here to read more.
You current ranking:
Time Left: 8h 30m 40s