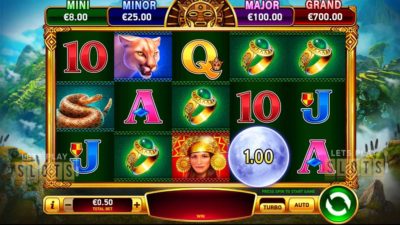 The Incas were one of the major civilizations of South America. They left behind signs of a massive empire that can still be seen today.

This makes them a favorite topic for slot games, especially when it comes to treasure hunts.

RubyPlay is showcasing the beginnings of their empire in their new slot titled “Dawn Of The Incas“.

Players are taken to the site of the Inca’s great power, the Amazon Jungle which is the theme of many slots, and presented with a grid that lets them compete for the big prizes. The play area consists of five reels and three rows.

There are 50 paylines available which gives players a good chance to win. The game offers a high RTP of 96.90 percent.

The low-value symbols are the various card royals, starting from 10 up to A. The next level of symbols is the thematic symbols. There is a ring, a tiger, a bird, and a snake. The most valuable of the bunch is the bird. Players who score five of it will be able to get 3x their stake.

Dawn Of the Incas has some special features for players to enjoy. First, there are three special symbols. The first is the pyramid, which is the game’s scatter. Next, there is the beautiful tribal woman who acts as the game’s wild. Players will also have a sun and a moon symbol that can get them a jackpot. The Wild is easy to understand. It substitutes for regular symbols and appears on the last four reels.

Then there are the special features. First, there is the free spins feature. Players who score three or more scatters will be able to six free spins. During the spins, the three middle reels will combine into one. This makes it easier to win.

Besides that, the game also has the Double Sunlight Spins bonus, which happens when players land six or more sun and moon symbols. Players get three free spins on blank reels where players try to collect as many sun and moon symbols for the bonus. A full grid will payout 1400x the player’s stake. Finally, there is the Jackpot Pick feature which randomly happens and players have to pick suns to earn a Mini, Minor, Major, or Grand Jackpot.

If you are not put off by the betting range, go ahead and give Dawn Of The Incas a few spins.

Hurray! There is a competition going between users of our site!
You have to do nothing, but browse out site, and win a daily prize. Click here to read more.
You current ranking:
Time Left: 9h 47m 27s