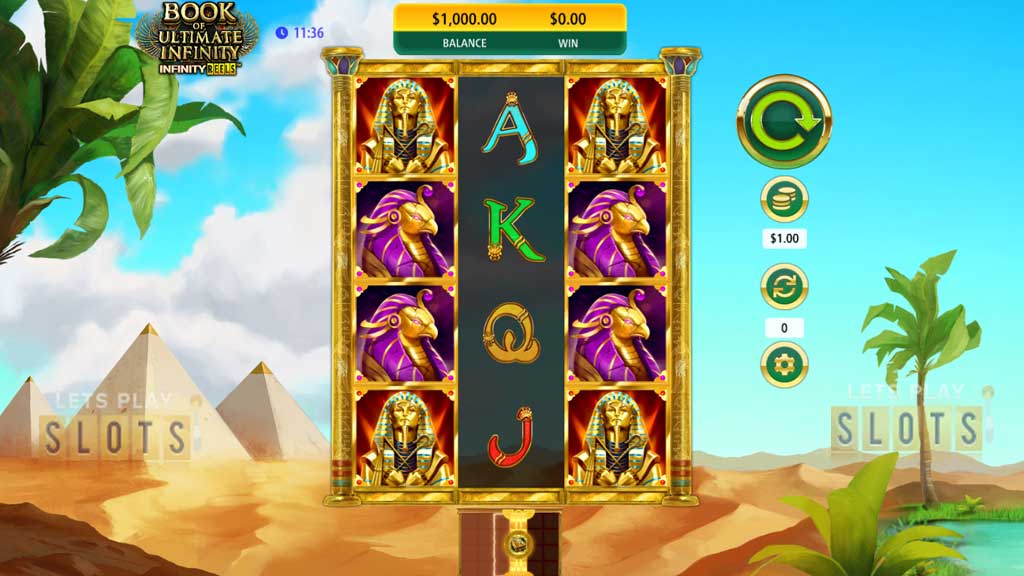 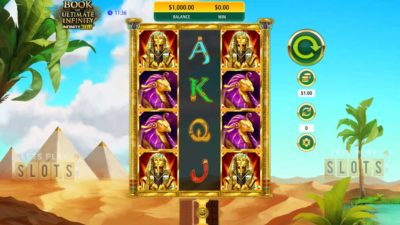 If you are looking for new slots that don’t have a holiday theme to it, you should check out the new game from Red7Mobile. Their latest slot is called the “Book of Ultimate Infinity“. In this game, players are taken deep into the Egyptian desert where there is a hidden oasis filled with special treasures.

Players are presented with desert scenery that has pyramids behind the reels and the small oasis dominating the background.

Players are presented initially with three reels and four rows. But thanks to the Infinity Reels mechanic players can get as many as 50 reels. All that players need is a winning combination of three or more symbols.

The game will continue to add reels as well as getting multipliers. Technically, there are no paylines since the game only checks adjacency. As long as symbols can connect, you get a combination.

The betting range in this game is a bit limited. It starts at $0.20 and only goes up to $50. In contrast, some slots can allow players to wager hundreds of dollars. Fortunately, the game is very volatile and players can win up to $250,000 if they are very lucky. It also helps that the game has a high RTP of 96.50 percent.

The game has an interesting set of symbols. At the lowest are the card royals. Next, there are thematic symbols. These include the Pharaoh, the Princess, the Sphinx, Ankhs and Daggers. The game also has two special symbols. The Book Of Ultimate Infinity Reels is the game’s scatter, while the Wild symbol is easily recognizable because it has the word printed out on it.

The main feature of the game is the Infinity Reels but it does not end there. The Wild symbol is there to make things easier because it acts as a substitute for all regular symbols. Players will appreciate its appearance whenever it shows up.

The Book provides the other bonus in the form of free spins. Players need to score three or more of it to get 10 free spins. During these free spins, players will see the Book appear on a random reel between six and fifteen. When it stops, it will give out freebies. This means that players have to unlock at least twelve reels if they want to get the best out of free spins. Also, the game chooses a random symbol to expand during the spins.

Hurray! There is a competition going between users of our site!
You have to do nothing, but browse out site, and win a daily prize. Click here to read more.
You current ranking:
Time Left: 14h 33m 50s
Gambling is for 18+ though some countries may have other restrictions...Remember you should always Gamble Responsibly
We use cookies to ensure that we give you the best experience on our website. If you continue to use this site you agree to allow us to use cookies, in accordance with our Terms & Conditions.Agree & Close