The Beautiful Game Gets A Slot Twist In “Football Cash Pots” 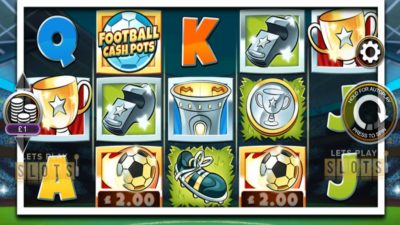 Football is one of the most popular games in the world as it is played by millions and watched by billions. Inspired has decided to take the beautiful game and create a new sports themed slot titled “Football Cash Pots“.

Players who start this game will immediately find themselves in the middle of an impressive football stadium. They are brought into the middle of the stadium and are given the task of playing and trying to win a major football tournament.

Combined with great sound effects, players will enjoy the slot themed football experience. The graphics are a bit cartoony but they add to the fun times that the game has to offer.

When it comes to gameplay, the grid dominates the middle of the screen. It has the familiar 5×3 grid layout but only has 10 paylines. The game has the card royals as the usual lower-value symbols but players will want to score the more valuable football items. This includes the coin for the coin toss, football sneakers, balls, trophies and even a stadium.

Players will have a minimum bet of 0.10 credits. Players can raise this a bit further if they think they can win big. The maximum is up to 60 credits. The game has a pretty good RTP of 96.5 percent, which gives you more than a fair shot at winning.

The basic game is fun enough but players will want to play this game for the special features. Players will love the big bonuses that they can get during their spins.

For one, there is the Cash Collector Bonus. Players trigger this feature by landing six or more balls on the first four reels and getting a bonus symbol on the last reel. The more balls that appear on the four reels, the bigger the prize will be. It doesn’t end with one spin though. Once players score the six balls, all other positions that are not a bonus symbol or balls will be respun five times. This is to maximize the number of balls on the screen.

Players will also have a chance to come back from a loss. Players who have credits below the current bet setting, like having 15 credits when the wager is 60 credits, will have a chance to spin one more time to try and get a win. Players who do so can take the chance and maybe get one more win to get back some money and continue their play.

Hurray! There is a competition going between users of our site!
You have to do nothing, but browse out site, and win a daily prize. Click here to read more.
You current ranking:
Time Left: 11h 50m 7s