Champions Goal is a football themed slot by ELK Studios and it brings innovative gameplay, win both ways, Sticky Wilds, Cascading Tifo feature and a free spins game that plays out like a game of football! 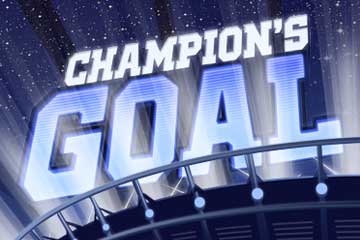 Champions Goal is an association football themed slot that I have played for a few hours in order to be able to write a review of the slot game, and I can share with you what I think are this slot’s pros and cons that you should know before playing the game. First of all, it’s a great slot for football fans as it includes everything you’d like to see in a football theme. The free spins game is fun, and so is the main game as it offers several wrinkles that enhance gameplay. The theme shows not only players but fans too, even hooligans with flares. Champions Goal was released in 2015.

There are 10 fixed paylines on a standard 5×3 board, which is actually 20 since there are symbols that pay in the opposite direction. You pay 20 coins to play these paylines, and the minimum bet per spin is $0.20 while the maximum is $100. Theoretical return to player is 95.70%, just barely enough, but the game is still fun to play. Variance is medium, perhaps even a bit high as the best possible win in this game is really big, in the region of $200,000. And that’s a really good reason to play this slot machine.

The two paying Scatters are actually the high-value symbols, though they pay only slightly better than the Red and Blue group. There’s also a Wild symbol that substitutes for all regular symbols, and this makes for a total of eleven symbols in the game. I felt that the paytable is skinny as the high-value symbols don’t pay enough, and therefore the game is deprived of some powerful symbol. 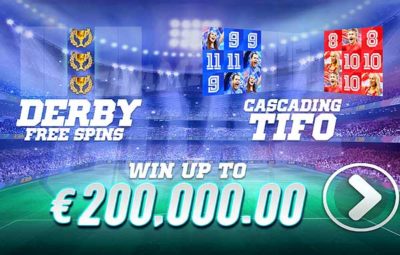 The main bonus feature of the game is the one that gets triggered during the main game. The Cascading Tifo feature will get triggered whenever you fill a 3×3 area on your reels with either Blue symbols only or Red symbols only. You’ll win three extra spins and can get some Sticky Wilds, too.

To enter the free spins game, you need to land three Trophy Scatters on reel 3. When you manage to do that you’ll be taken to the insteresting Derby Free Spins feature which will give you 7 free spins to start with. Any Trophy Scatter that lands on your reels will give you one extra free spin. When you land a Ball, it triggers a Free Kick, and the following win will be multiplied by x5. Colliding free kicks clear all symbols. Referee triggers Sticky Corner, a free re-spin with a Sticky Wild in each of the four corners of the board. This free spins game is very fun, and football fans will love it.

While with this theoretical payout the slot game can’t be taken seriously by pro gamblers, it’s still a slot game that offers a chance to win big. And that can happen anytime while you’re enjoying symbols that pay in both directions, the Cascading Tifo feature, and then the superb free spins game with Free Kicks and Corner Kicks. Very fun game to play for football fans, and a lot of money can be won, too. This slot machine is most often played by a football fan who is drawn to the theme, and then sticks with this slot because of innovative gameplay and a chance to win a lot of money.

Champions Goal is a football themed slot by ELK Studios and it brings innovative gameplay, win both ways, Sticky Wilds, Cascading Tifo feature and a free spins game that plays out like a game of football!

Hurray! There is a competition going between users of our site!
You have to do nothing, but browse out site, and win a daily prize. Click here to read more.
You current ranking:
Time Left: 2h 11m 16s