Hidden is one of the better Egyptian themed slots, it was released by Elk Studios and is a visually impressive slot game. Win up to 215,000 coins if you find the hidden treasure!

Hidden is a great game for fans of Egyptian themes, and since I am one of those, I have played this slot a number of times since its release in the second part of 2017. Let’s have a detailed look at this slot machine and see how does it stack up against other slots from the genre.

The game is beautiful to look at and features cartoonish graphics that depict the Egyptian theme. But instead of the usual symbols of Scarab, Horus or Cleopatra, this game uses symbols that depict the expedition to Egypt – the Explorer, the Apprentice, the Camel and the Sphynx. The game really comes to life after every win as animations are stunning, and this is one good looking Egyptian themed game. Everything is done in high resolution, and the intro is just great and rivals scenes from Indiana Jones movies. The game is also fully optimized for mobile, and looks great on any sized screen. The symbols are blocks that fall from above, and that’s always impressive to look at.

Theoretical return to player (RTP) is 96.03%, which isn’t bad, and variance is medium but the win frequency isn’t very high. This game doesn’t pay often despite having 178 ways to win, but when you do win, the win will be worth the wait most of the time. This is, in my opinion, a better setup than those slots that constantly pay but pay less than your stake. 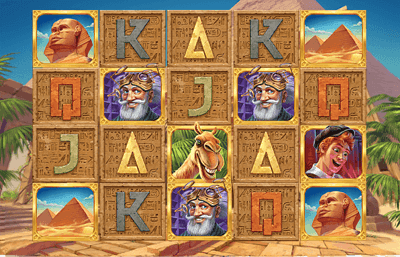 There are a total of nine normal symbols in the paytable, and five of those are low-paying card symbols. The paytable progresses gradually from low- to high-paying symbols, and the difference between the best and worst symbol is some 15x. The top prize is 1000 coins, which is actually 10x your bet, and the next-best symbol pays 500 for five-of-a-kind. There are enough symbols that pay well, so it’s possible to make money on this slot game with 178 ways to win. This is essentialy a 243 ways to win game, but it’s not enough for symbols to be adjacent left to right, they must be adjacent top to bottom as well. There can’t be an empty space between the two symbols vertically, edges must touch.

There are two bonus features in this game, and one applies to the main game and is triggered randomly, and there’s also a free spins game. Flashback Respins is a feature that’s triggered randomly between spins in the main game, and when it’s triggered up to all three middle reels will be covered in Sticky Wilds that remain in place for three re-spins. This sounds rewarding, and it is, Flashback Respins is a great feature that can pay well. 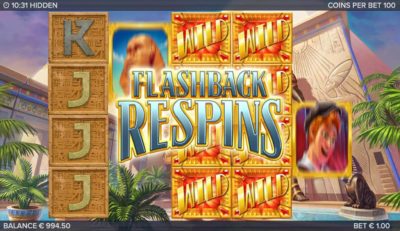 The free spins game is triggered when you land three Magnifying Glass Scatters. You’ll get 5 free spins to start with, and will then get a +1 extra free spin for each Scatter that lands on your reels during the feature. Before the free spins game even starts, one symbol will be chosen randomly to become an expanding symbol, and all occurences of that symbol will expand clockwise to a 2×2 area.

Hidden is one of the better Egyptian themed slots, but is one that has medium variance as opposed to high variance which we normally associate with the genre. This is a game for casual players who’d like to play a slot game of this theme, and Hidden is easy and fun to play. The big jackpot is still here, 215,000 coins is worth a lot, that’s 2150x your bet. Overall this is a fun game that shouldn’t be overlooked just because it doesn’t feature Cleopatra, a Scarab, and high variance. Do play this one, it would be a mistake to ignore it.

Hidden is one of the better Egyptian themed slots, it was released by Elk Studios and is a visually impressive slot game. Win up to 215,000 coins if you find the hidden treasure!

Hurray! There is a competition going between users of our site!
You have to do nothing, but browse out site, and win a daily prize. Click here to read more.
You current ranking:
Time Left: 19h 9m 22s