Win Win is the latest evolution of three-reel slots, with a maximum possible win of €500,000! ELK Studios created a fantastic slot game with lots of bonuses, features and interesting powerful symbols, all that on a 3×3 board with 17 paylines. This solves the main problem of three-reel slots, and that’s that they are boring. This one is far from it! 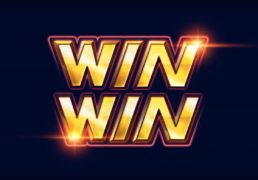 Win Win is a 3×3 slot game that does things a bit differently and attempts to attract the three-reel audience by offering more than what the players are used to. One of the first things you notice is that this three-reel slot machine has 17 paylines, which is plenty, so the chances to win are greater than usual.

There are no coins either, which is how ELK Studios simplified the usual nature of three-reel slots and adapted it to modern mobile-first players. It’s easy to select your bet per spin as you choose between 16 available options, ranging from €0.20 to €100. In addition to this, ELK Studios has Betting Strategies in all their games – Optimizer, Leveller, Booster and Jumper – that allow you to automatically select a pre-determined betting strategy with bet levels of your choice.

There are nine main symbols in the paytable, grouped in three groups. The lowest one are fruit symbols and they pay from 0.50x to 1x for three-of-a-kind, while the middle Bar group pays from 1.50x to 5x. Sevens are the best symbols in the game, as Green, Blue and Red pay 10x, 12x and 15x your bet respectively.

The game also has Locked Reels Respin feature that is triggered when you land identical symbols on the entire first reel and the entire third reel. This will make the middle reel respin 3 times while the first and third reel are locked into place. 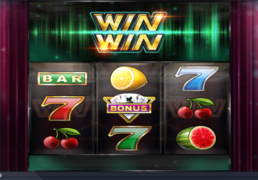 This is one of the rare three-reel slots that has a free spins game. When you land three Bonus symbols anywhere on the reels you’ll trigger the bonus round with potentially an infinite number of free spins.

The bonus game starts with a random win multiplier, and every win advances the multiplier one step – x2, x4, x6, x8 and x10 – and every non-winning spin reduces it by one step. The feature ends when your multiplier steps below x2. Bonus symbols become Wild during the free spins game, so that makes winning much easier, and also gives you a rarely seen feature in three-reel slots, a Wild.

Theoretical return to player (RTP) of Win Win is 96.10%, which is good enough and is similar to most modern slots. Maybe some three-reel slot fans will expect incredibly high RTP, but this isn’t the game, this one is really fun to play and offers huge wins but the RTP isn’t as high as some games that are great in theory but don’t play too well. This, on the other hand, is a fantastic slot.

ELK Studios managed to create an almost perfect three-reel slot game, with tons of bonus features, a free spins game, respins, Wilds, Scatters, special wins, win multipliers. There’s never any shortage of fun with the Win Win slot, and the best feeling of all is when you land those two Win Win symbols. Do play this game if you even remotely like three-reel slots. It’s lots of fun and you can win up to half a million.

Win Win is the latest evolution of three-reel slots, with a maximum possible win of €500,000! ELK Studios created a fantastic slot game with lots of bonuses, features and interesting powerful symbols, all that on a 3×3 board with 17 paylines. This solves the main problem of three-reel slots, and that’s that they are boring. This one is far from it!

Hurray! There is a competition going between users of our site!
You have to do nothing, but browse out site, and win a daily prize. Click here to read more.
You current ranking:
Time Left: 12h 37m 12s