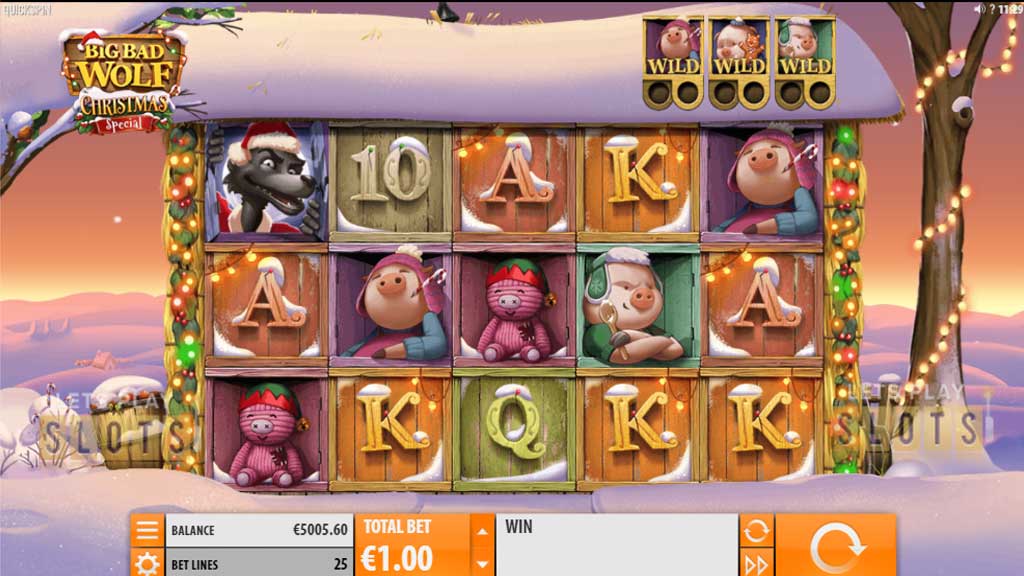 The “Big Bad Wolf” Gets His Own Christmas Special From Quickspin 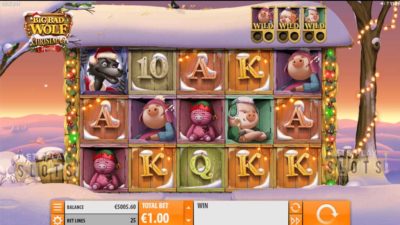 Quickspin looks like it is going to have a hit on its hands with its latest slot release titled “Big Bad Wolf: Christmas Special“. The developer took its previous Big Bad Wolf slot and made it exciting and fresh for the slot game market.

The theme should be familiar to most players. Three pigs are defending their house from being blown down by the nasty wolf.

This time though, the story has a Christmas theme to it as players see snow falling, as well as Christmas decorations in the house.

For those who played the original, it is a good thing to see that the Christmas theme is only a thin skin change.

All of the mechanics are still the same, so old players can come back to have fun once again. For those who never played this game before, the basics are pretty simple to pick up.

The grid is presented inside the house of the three pigs. There are five reels and three rows. There are 25 fixed paylines which is a pretty good number of paylines. It also helps that the game gives players a high RTP percentage of 97.34 percent. That is higher than normal so players will appreciate playing this game.

Players can bet from $0.25 up to $100 which is a betting range that can satisfy a wide group of players. This includes new players and even high rollers. The max cash jackpot you can win with this game is $4,000.

The card royals act as the low value symbols. The thematic symbols include the teddy bear, which now wears a Christmas hat. Then there are the three little pigs who are now wearing something festive. Finally, there is the big bad wolf, in a Santa outfit. He is the game’s scatter symbol, while an out-of-place beehive is the game’s wild symbol.

The game has some pretty great features. One is that it has cascading reels. When a player scores a winning combination, the winning symbols are removed and new ones appear. It is possible to get new winning combinations from this and it can continue.

Players can also activate the Pig Turn Wild. Players can score the pigs as part of a winning combination. Every second win of that pig turns all the symbols of that type into wilds. This lasts as long as the player wins. Six consecutive wins can turn all six pigs into wilds which results in a jackpot.

Finally, the wolf is there to provide players with 10 free spins if he is scored. During these free spins, the full moon symbol can appear and give massive bonuses.

Overall, this is a fun game that players should try out.

Hurray! There is a competition going between users of our site!
You have to do nothing, but browse out site, and win a daily prize. Click here to read more.
You current ranking:
Time Left: 1h 40m 48s