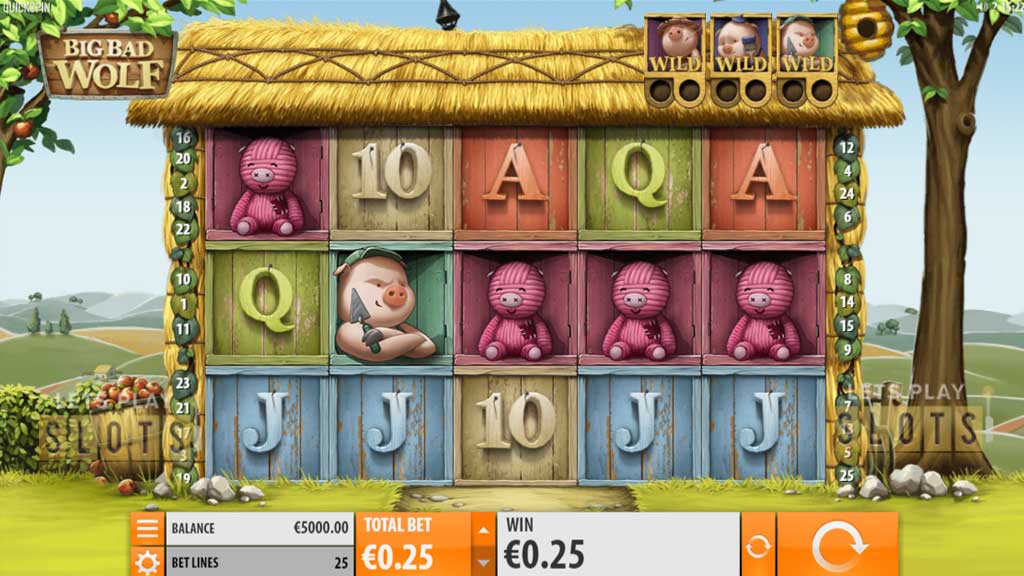 With the Big Bad Wolf slot running on the Quickspin software, players get to enjoy beautifully rendered graphics, awesome visuals as well as exciting bonus features. These features when triggered guarantee some generous winnings which in addition to regular payouts definitely make this game worth a spin or two. This neatly rendered Quickspin release is […] 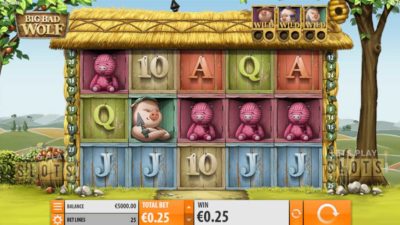 With the Big Bad Wolf slot running on the Quickspin software, players get to enjoy beautifully rendered graphics, awesome visuals as well as exciting bonus features. These features when triggered guarantee some generous winnings which in addition to regular payouts definitely make this game worth a spin or two. This neatly rendered Quickspin release is packed with 5 reels and 25 paylines packed with the high-end graphical solutions.

The game is definitely one of the most popular games out of rich Quickspin gaming portfolio. It is inspired by the popular tale of The Three Little Pigs. During their gameplay, players get to rediscover this famous story, enjoy some magical prizes and take advantage of the game’s highly lucrative bonuses offering great payouts.

Slot games are definitely much more than pure spinning the reels. They are also about creating their own unique universe packed with their unique features which draw players. By readapting popular stories and by using familiar characters, online casino software providers bring a sense of familiarity to their games. This is exactly what the Big Bad Wolf developer did bringing something both familiar and new in this highly interesting, unique creation.

The game most certainly impresses with its top-notch graphical solutions. It brings the story of the Three Little Pigs which are chased by an evil wolf which is trying to blow their house down. The game’s reels are neatly framed by a straw house. The game’s background depicts gorgeous meadow, hills, and fields which stretch down the horizon. The graphical solutions of the game are truly stunning dominated by pastel colors and interesting, highly vivid animations.

Following the theme of the game, the Big Bad Wolf reels are packed with symbols of the Three Little Pigs. There are also lower-valued symbols depicted as neatly rendered standard paying cards which match the rural scene of the game’s background. In addition to being packed with stunning visuals, the game also includes an interesting, quirky soundtrack which plays in the background adding more of a relaxing vibe to the gameplay. 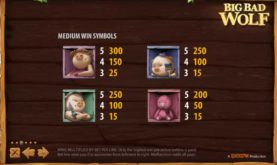 There is no shortage of lucrative bonus features depicted in the game for sure. During their gameplay, players get to enjoy plenty of Free Spins, awesome multipliers as well as reels loaded with Wild symbols guaranteeing more generous winnings. During their Big Bad Wolf gameplay, players should keep an eye on the game’s Wilds represented by the Beehive.

These symbols when landed on the reels replace for those regular symbols helping players score more winnings. Another very important symbol is the game’s Scatter represented by the Wolf symbol. Landing three or more of these Scattered Wolf symbols on the reels activates the game’s Free Spins more. This mode can be re-triggered by landing more Scatter symbols on the reels. Moreover, winnings with three or more Scatter symbols contained are subject to a great 3x multiplier.

The game is also packed with another interesting bonus mode. It is the game’s Swooping Symbols mode. After every winning spin, those winning symbols are removed and replaced by other symbols dropping from above. The game, in fact, continues dropping new symbols as long there is some winning combination landed on the reels and it costs players nothing.

Let’s Blow Down the House 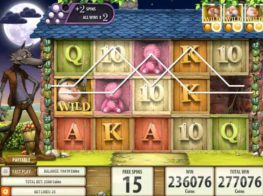 Finally, there is also very interesting Blowing Down the House bonus mode. In order to trigger this mode, players need to find at least three Moon symbols. Once there, they are awarded two extra spins. If they find six Moon symbols, they get two bonus spins which come alongside a great 2x multiplier doubling those winning paylines.

With its impressive graphical and audio solutions, the game most certainly impresses. When we add here its lucrative bonus modes offering great payouts, the game is definitely your route to generous riches.

With the Big Bad Wolf slot running on the Quickspin software, players get to enjoy beautifully rendered graphics, awesome visuals as well as exciting bonus features. These features when triggered guarantee some generous winnings which in addition to regular payouts definitely make this game worth a spin or two. This neatly rendered Quickspin release is […]

Hurray! There is a competition going between users of our site!
You have to do nothing, but browse out site, and win a daily prize. Click here to read more.
You current ranking:
Time Left: 4h 54m 37s
Gambling is for 18+ though some countries may have other restrictions...Remember you should always Gamble Responsibly
We use cookies to ensure that we give you the best experience on our website. If you continue to use this site you agree to allow us to use cookies, in accordance with our Terms & Conditions.Agree & Close