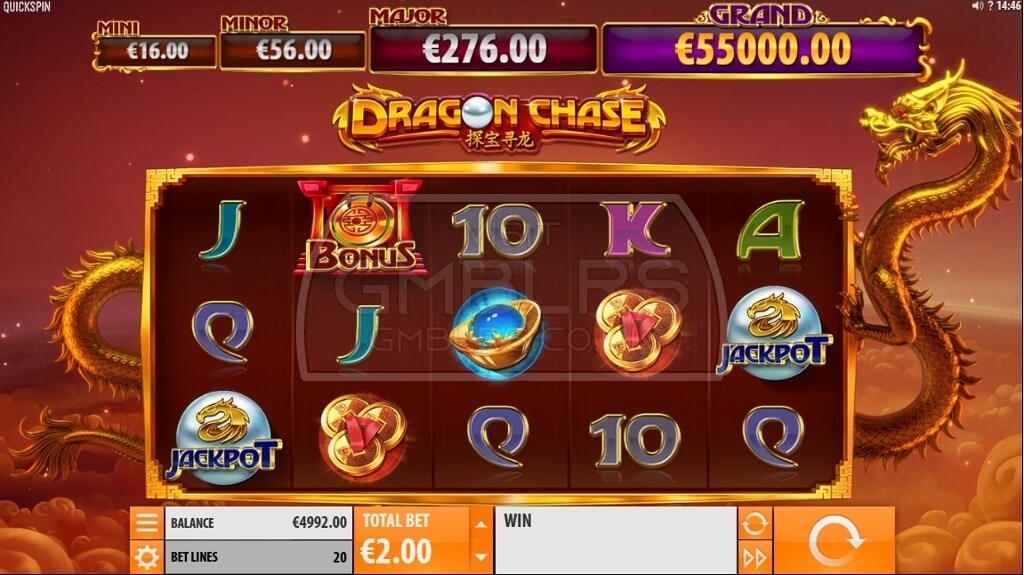 Dragon Chase is a 5×3 jackpot game by Quickspin that offers high variance and a good paytable, as well as tons of Wildfire Wilds that can randomly be placed on your board by the fire-breathing dragon that sits beside your reels.

Dragon Chase is a step in the right direction for Quickspin as it offers high variance and high payouts, something Quickspin hasn’t really been doing, and it’s also the first jackpot game by this developer. Visually this isn’t the best of games, but it’s supposed to offer plenty of good things to players.

The game is played on a 5×3 board with 20 fixed paylines, and your bet per spin can range from €0.20 to €100. This will satisfy most players, from those on a budget to high rollers. The bigger the bet the better the chance of winning the jackpot, so it’s good that the maximum bet is capped at €100. 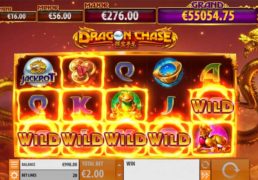 The Dragon that’s in the background of the reels will occasionally come to life and will breathe fire, and will create several Wildfire symbols that are Wilds that remain on the board as they slowly move one row down with each spin. Up to 10 of these symbols can appear on the reels, and they will make a huge difference when it comes to both the win frequency and the quality of wins you’re getting, especially as they’re walking Wilds that don’t last just one spin but several spins.

The paytable consists of five card symbols that really don’t pay much as the maximum possible prize is 2.5x your bet, and then there are two symbols with a prize of 7.5x your bet. Frog pays up to 20x, Lion pays up to 50x, same as the Wild that is a paying symbol. This kind of paytable can indeed produce big wins, and the best possible win would be a full board of Lions, which would be worth 1000x your bet. 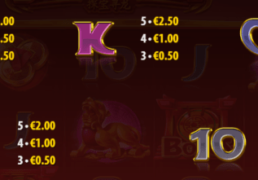 There are four jackpots that can be won, and their values are displayed above your reels. 15

Theoretical return to player (RTP) is 96.39% which isn’t all that special but isn’t bad either, but anyway it’s the features of this slot game that will attract players. Variance is a bit high as the game doesn’t pay often, and the biggest wins are hidden behind lots of spins you need to make to finally see them. Wilds help, but it’s still a high variance game.

Dragon Chase feels a bit forced as Quickspin attempt to create a high variance game, but it’s still a decent game that deserves to be played for real money, if not for any other reason then for the jackpots. This is a good slot game to try out and to have fun with, it does have plenty of advantages that you’ll see when you start playing. You’ll find the game in all Quickspin casinos. There are two versions of the game and the operator can choose to run one or both.

Dragon Chase is a 5×3 jackpot game by Quickspin that offers high variance and a good paytable, as well as tons of Wildfire Wilds that can randomly be placed on your board by the fire-breathing dragon that sits beside your reels.

Hurray! There is a competition going between users of our site!
You have to do nothing, but browse out site, and win a daily prize. Click here to read more.
You current ranking:
Time Left: 21h 51m 22s