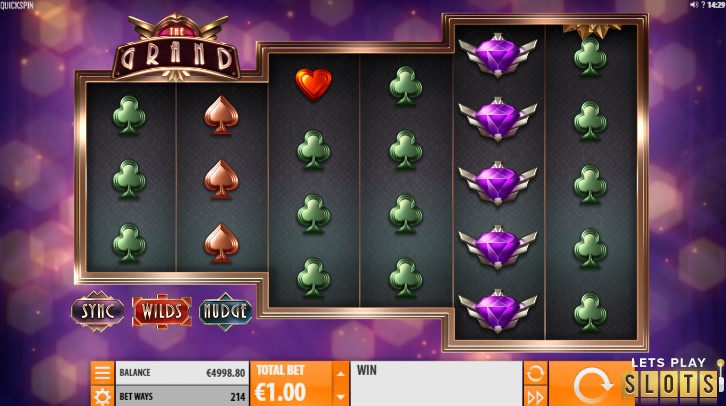 The Grand certainly implies that this slot game will have plenty to do with a well-to-do hotel chain. However, it’s not quite as themed as one would expect. Quickspin does make sure to include Free Spins, Wilds and one or two other features to keep you entertained, though.

Best Casinos to Play The Grand for Real Money :

I have to say that when I saw the title of this Quickspin game, I thought it was going to be about some sort of superior hotel. Now, that would make for a great theme of a slot game, I thought. Yet, when I loaded it up, it wasn’t really anything to do with that at all. Instead, it was a little bit of a let-down in terms of a theme, because it doesn’t really have one so to speak. Overall though, I found myself to be quite entertained by it. 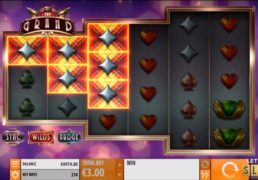 The setup of this slot game is probably one of its more entertaining features. Consisting of six reels and a stunted row set (3x3x4x4x5x5), it stands out amongst many others. Across the layout, you’ll find that there is a total of 214 ways for you to win, and your bet on these winning ways can also be changed. Using the relevant buttons at the bottom of the reels, you can select bets of between €0.10 and €100 per spin.

The imagery within The Grand is also very pleasing to the eye, I found. The first of its symbols are present in the form of the playing card suits, with the silver diamond and the green club being the first of such. The pink spade and finally the red heart make up the last of these, with the latter able to pay out up to €120. The higher-paying symbols are of what look to be elevator bells, with the purple one providing a pay-out of €400 at a maximum, and the green one offering rewards of up to €800. 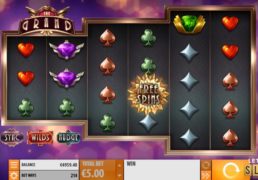 Once you activate the slot’s free spins round, this is when things get more interesting with The Grand. You’ll need to spin three or more free spin icons into view anywhere to be able to do this, but at that point you will be given up to 15 free spins of the reels.

If, while the free spins round is in play, you spin three bonus symbols into view anywhere on reels three, four and five, you will activate the Grandomizer feature. This will proceed to unlock a single feature – Sync, Wilds or Nudge. It will also give you one, two or three additional free spins to play through. You’re also able to combine these features by unlocking two or all three of them. 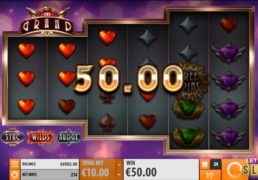 While I was a little bit let-down by what The Grand slot was able to offer in terms of a theme, the execution of its gameplay and the inbuilt graphics are very nice indeed. I’m also a fan of slots always having free spins, which is a box that The Grand checks off. It’s a decent slot to play, I’d say.

The Grand certainly implies that this slot game will have plenty to do with a well-to-do hotel chain. However, it’s not quite as themed as one would expect. Quickspin does make sure to include Free Spins, Wilds and one or two other features to keep you entertained, though.

Hurray! There is a competition going between users of our site!
You have to do nothing, but browse out site, and win a daily prize. Click here to read more.
You current ranking:
Time Left: 6h 20m 3s
Gambling is for 18+ though some countries may have other restrictions...Remember you should always Gamble Responsibly
We use cookies to ensure that we give you the best experience on our website. If you continue to use this site you agree to allow us to use cookies, in accordance with our Terms & Conditions.Agree & Close