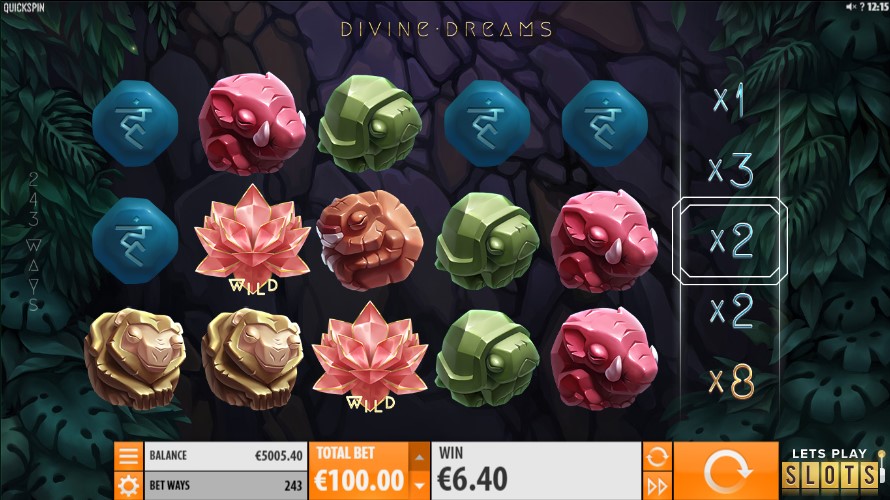 This slot game from Quickspin is certain to make you feel as close to divinity as possible. With a stellar soundtrack, impressive graphics and inbuilt features like the Yin Yang Wild and Sacred Respins, Divine Dreams is definitely the ultimate experience. 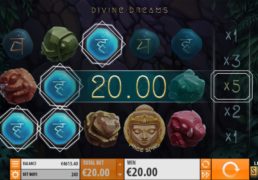 They say that divinity is something that only reaches a few people, yet with Divine Dreams from Quickspin, it could quite easily get to a few more. I was immediately intrigued by this slot, but then again, when it comes to this developer’s releases, I always am. Little did I realise that it would be quite as thrilling as it actually is. It features the usual blend of high-quality graphics and smooth gameplay, whilst also providing gamers with some thoroughly appealing inbuilt special features. 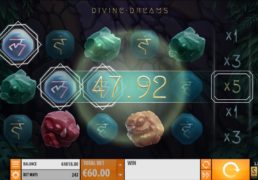 The game itself incorporate five reels of symbols, as well as three rows. To the right-hand side of the five reels is a bonus reel, featuring special symbols. Across the reel set, Divine Dreams features 243 ways to win as well, and this instantly appealed to me. I’m a bit of a sucker for ways to win, rather than standard pay lines. You’re able to adjust your wager by using the arrows at the bottom of the reels. This gives you the chance to choose from a bet between €0.20 and €100 per spin.

As far as the symbols on the reels are concerned, the low paying symbols are all present in the shape of what appear to be astrological symbols. The highest of these can pay out up to €200. The higher paying icons come in the shape of sleeping animals, although they are designed to look like they’re etched out of rock. There’s a fish, a tortoise, a monkey, a tiger and an elephant. The latter of these is able to pay out up to €1,500. 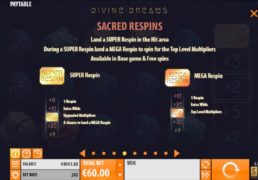 The special features of this game are what grabbed me the most, though. To begin with, on every spin, the special bonus reel will spin as well. This reel features various extra symbols, including multipliers up to times 10, wild symbols, re-spin symbols and extra spins.

Landing the Super Respin symbol on the bonus reel will give you a single re-spin of the reels with extra wilds, upgraded multipliers and a chance to land a Mega Respin.

The Divine Free Spins round is my favourite though. If three or more of the scattered buddha symbols show up on the reels, you’ll activate this round. Eight, 12 or 20 freespins will be gained, depending upon the number of scatters in view.

I have to say that this is one of my favourite slot games from the Quickspin brand. It features amazing graphics for you to experience, as well as a selection of inbuilt features to entertain you with. Overall, it certainly brought me a touch closer to divinity, I’d say.

This slot game from Quickspin is certain to make you feel as close to divinity as possible. With a stellar soundtrack, impressive graphics and inbuilt features like the Yin Yang Wild and Sacred Respins, Divine Dreams is definitely the ultimate experience.

Hurray! There is a competition going between users of our site!
You have to do nothing, but browse out site, and win a daily prize. Click here to read more.
You current ranking:
Time Left: 57m 2s