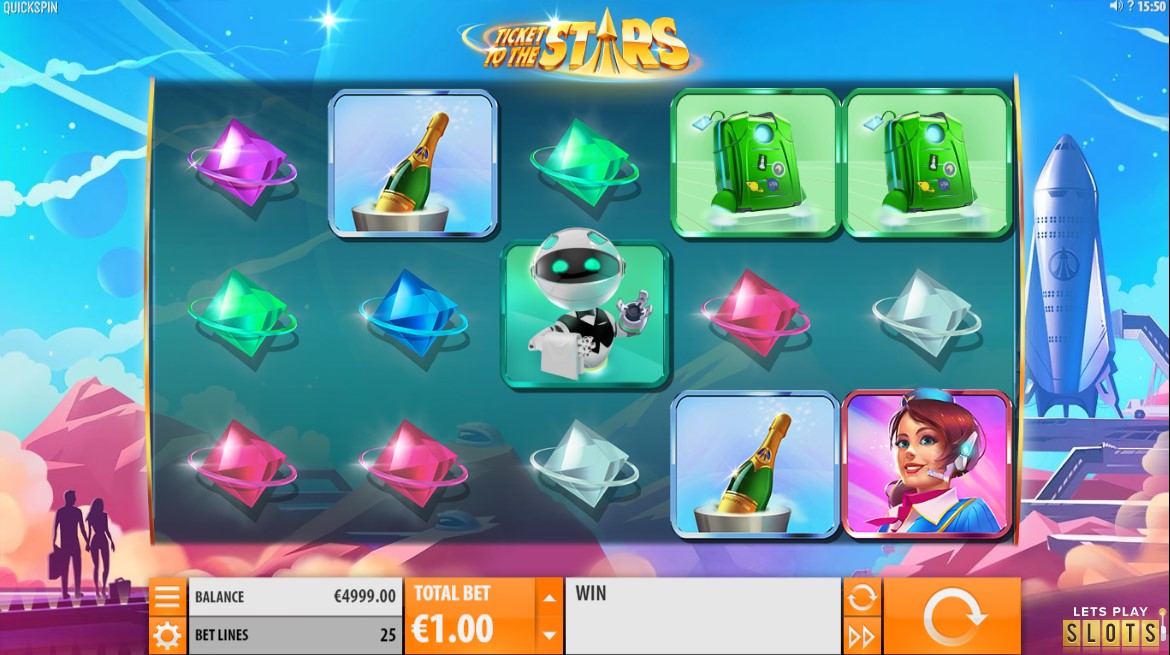 There’s a shuttle leaving for outer space, and you could be on it with your own Ticket to the Stars. While you’re spinning the reels of this Quickspin game, you could find yourself enjoying an Unlimited Multiplier Meter, a Free Spins round, a Wild symbol and more.

Best Casinos to Play Ticket to the Stars for Real Money :

I always know when things are about to pick up in the online slot world. Because Quickspin starts releasing new titles like Ticket to the Stars, and boy does this ever provide you with an experience that could propel you into outer space. The game has such incredible inbuilt graphics and I love the special features that it incorporates as well. Everything merges so nicely together in the game that it’s one I will keep at the top of my “playlist” for a long time. 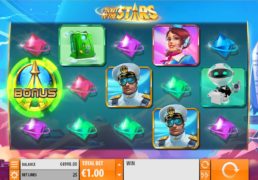 I like the fact that Ticket to the Stars maintains a standard layout for a video slot, incorporating five reels and three rows for you to spin. The developer has also placed 25 paylines into the slot as well, which cannot be altered. The bet that you place on these lines, however, can be changed, with the relevant arrow buttons. These allow you to choose from wagers between €0.25 and €100 per spin.

Visually, Ticket to the Stars has some very appealing graphics within, featuring a futuristic space station in the background to begin with. Then, on the reels, you’ll get to see five gemstones of different colours – silver, blue, green, purple and red, with the latter two providing maximum rewards of €400. Then comes a space rocket backpack, followed by a bottle of champagne for your journey. A robot assistant symbol can pay out up to €1,200. Then comes a flight attendant and, finally, the highest paying standard symbol is that of the pilot, who can reward you with up to €2,000. This Quickspin game has some really nice special features for you to experience, starting with its wild symbol. This can substitute for all other standard symbols in the slot, helping you to create wins. Five of the wild on a winning payline will pay out up to €2,000.

Speaking of wins, any time that you form a combination, the symbols involved in such will disappear and allow new ones to fall onto the reels. This continues happening until no further wins can be formed, building up your overall win total for that spin.

There’s also the addition of the Unlimited Multiplier Meter, which increases by one after every third win formed. Two additional spins are then granted to you and the Multiplier is applied to every single win during the slot’s free spins round.

Finally, as far as the free spins round goes, this is triggered by three or more of the scatter “Bonus” symbol showing up on the reels anywhere. You can win up to 25 free spins and any additional scatter symbols appearing during this feature will add an extra five free spins to your total. Speaking personally, I haven’t been able to fault Quickspin on many of its games, and Ticket to the Stars is another to add to that list. It’s got something for everyone, uniting high-quality graphics with stellar base gameplay and intriguing additional specialities to thoroughly entertain. Definitely a slot to keep returning back to again and again.

There’s a shuttle leaving for outer space, and you could be on it with your own Ticket to the Stars. While you’re spinning the reels of this Quickspin game, you could find yourself enjoying an Unlimited Multiplier Meter, a Free Spins round, a Wild symbol and more.

Hurray! There is a competition going between users of our site!
You have to do nothing, but browse out site, and win a daily prize. Click here to read more.
You current ranking:
Time Left: 5h 18m 53s