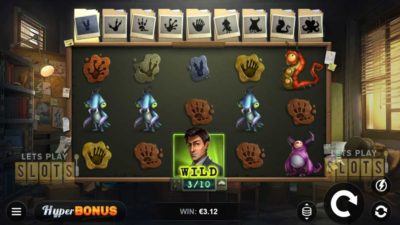 There are hundreds of conspiracy theories floating around that suggest that there is a whole secret world out there. This has been the focus of lots of new movies and TV shows in recent years. Those who like the conspiracy theory angle, will find the new slot from Kalamba Games very interesting.

The new slot is titled “Agent 51” and takes players to the 1960s to investigate things. Players are taken to the titular agent’s office and they are confronted with various artifacts. The soundtrack brings this game to life and builds the excitement.

Once you launch this game, you will see the grid presented on a big blackboard. There are five reels and three rows which is pretty standard along with 20 paylines. Unfortunately, the game limits the wagers that players can make.

While the minimum of $0.50 is fine, the maximum of $40 is very limiting. High rollers will not be happy with these limits. This game is best suited for mid-stakes players as the $0.050 starting bet can be a bit high for those with a limited bankroll.

The game’s symbols are great since they are all thematic. Players won’t find any card royals lurking about. There are five alien footprints, which are the low-value symbols, and then there are the alien creatures which have a higher payout. The most valuable alien is the yellow one. It pays out 80x at its ultimate level.

The game has several special features that spike the excitement factor. The main special symbol that the game has is Agent 51. He acts as the game’s Wild and Scatter symbol. Some of the other interesting symbols include the Polaroid camera which is the accumulation symbol and an alien ship as the Free Spin symbol.

K-Loops is by far the game’s most interesting feature. The game has several polaroid photos above the reels that keep track of every symbol. When a Polaroid symbol appears on the reels, a random symbol is chosen to be added to the photo set. If a symbol is already chosen, a multiplier will be given for that symbol. At the end of ten spins, the symbols on the polaroid photos become expanding symbols.

The Special Agent symbol also provides a special feature, with players receiving eight free spins for scoring three Agent 51 symbols. During these free spins, the UFO symbol will show up to act as the second scatter symbol and make additional free spins possible.

If you are looking for a fun themed slot that has intrigue to it, go ahead and give Agent 51 a few spins!

Hurray! There is a competition going between users of our site!
You have to do nothing, but browse out site, and win a daily prize. Click here to read more.
You current ranking:
Time Left: 19h 16m 44s