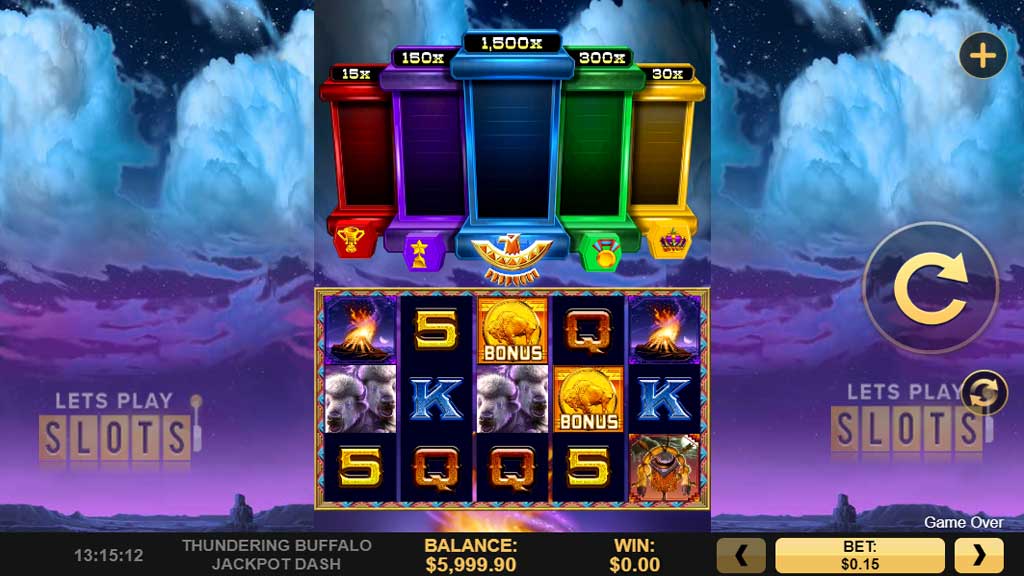 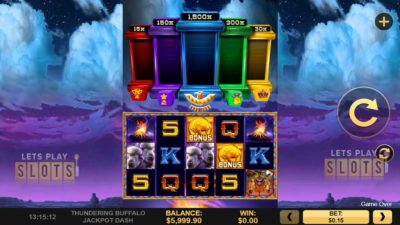 The majestic buffalo are mascots of the plains and are usually associated with the vast flat vistas of the Wild West. High 5 Games is bringing them back in a big way with “Thundering Buffalo Jackpot Dash“. A remake of the original Thundering Buffalo game from 2011, this release updates the game to modern standards which makes it pretty fun.

Players are taken to the vast plains of the Wild West and they get to see the buffaloes rampage among the reels with thunderclouds in the sky. The music matches the theme and players will like what they see and hear. Featuring five reels and 243 ways to win, the game wants players to get winning combinations. The game itself is designed for mobile devices with an emphasis on the reels as the main sign.

The basic game is pretty simple. There is nothing fancy at all. It does have a wild symbol to help with the wins. There are even scatter symbols that will allow for bonus spins. Most of the time, players will be using both turbo play and the autoplay option for the basic game. This allows them to just leave the game spinning until a win happens.

The real core of the game is the jackpot game. Though the game is not a progressive jackpot one, players still have a chance at super big wins. The mechanics for the jackpot are simple. Players only need to collect a particular symbol. Every time a player gets a winning combination, this is added to the collection. Players need 10 symbols to win a jackpot for that particular symbol. That can be tough considering that random chance can make it hard to get the right set of symbols.

The payout of the jackpot all depends on the symbols. Players who get the trophy symbol set will get 15 times their total bet. The crown set is worth 30 times the total bet. Gold star sets reward 150 times a player’s stake. Gold medal sets are worth 300 times the original stake. Finally, the most rewarding is the Eagle set. Players lucky enough to score it will get 1,500 times their original bet.

Overall, the game is rather basic but is great to play. You can set it on autoplay and go for a few spins and see if you come out on the winning side.

Hurray! There is a competition going between users of our site!
You have to do nothing, but browse out site, and win a daily prize. Click here to read more.
You current ranking:
Time Left: 7h 48m 35s