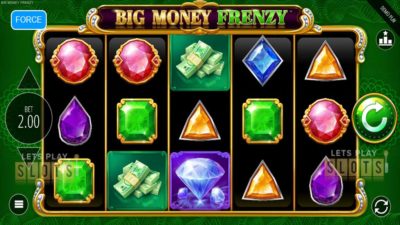 Blueprint Gaming has released a very interesting slot game that gives players the chance to win big. The new slot is called “Big Money Frenzy” and is all about big jackpots and heavy payouts. The developer has kept things very simple with the design and layout and placed the emphasis on the gameplay.

The game presents players with a 5×3 grid and 10 paylines. Players are greeted with a green background and the reels are set with a gold lining. Big jackpots mean big stakes. Players will like the variance in the wagers, starting with a minimum of $0.10.

Players who want to play for high stakes can go all the way up to $200. High rollers will love the game for this reason alone. It also helps that the game has a massive payout of 50,000x at the highest level along with a good RTP of 96.05 percent.

As for the symbols, the game is all about the bling. The lowest value symbols are five different precious stones. That is a welcome change from having to deal with the card royals. The more valuable symbols are in the form of Gold Bars, Cash Bundles, Stacks of Coins and Diamonds. The surprising thing about this slot is that it lacks any form of wild symbol.

While the Wild symbol is missing, the game does have a few special features. Instead of Wilds, there are Mystery Symbols. These are unknown symbols that only change into a particular symbol when they stop. The great thing about them is that they can appear as a full stack, so players can potentially get a full stack of the same symbol.

The game also has some Money scatter symbols. If these show up and there are three on a payline, it triggers a special bonus game. Players get to spin the reels with only the Money icons and black slots. Players then try to collect as many of the symbols as they can within three respins.

If a new Money icon shows up, those respins are reset. There is one special symbol that shows up and it is the Frenzy symbol. When this shows, all the Money symbols are collected and rewarded while players get to play again.

Overall, Big Money Frenzy is a pretty fun game that can result in a big payout, if you get lucky!

Hurray! There is a competition going between users of our site!
You have to do nothing, but browse out site, and win a daily prize. Click here to read more.
You current ranking:
Time Left: 6h 15m 7s