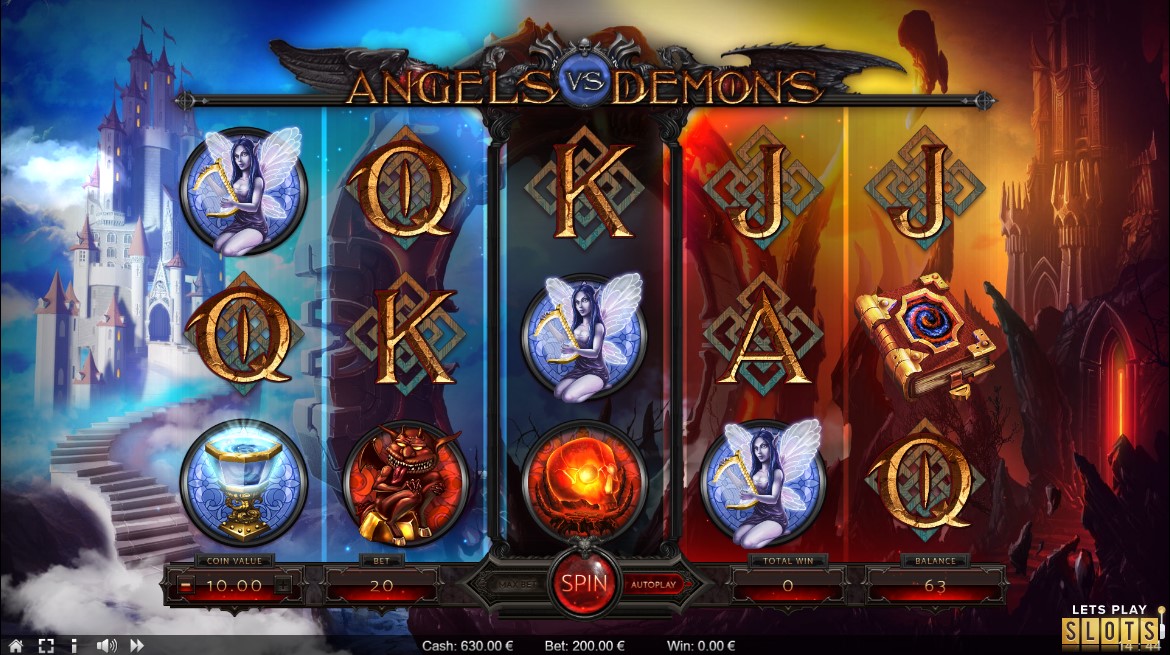 Jump into this slot game which puts Angels in a match-up against Demons, thanks to the design qualities of AGames. While playing this slot, you should watch out for the appearance of Moving Wilds, Double Wilds and so much more.

Best Casinos to Play Angels vs. Demons for Real Money :

I’m always thrilled to play a slot game that incorporates the fight of good against evil, especially when it’s demons against angels. It’s almost like AGames heard my thoughts on this theme and chose to make an online slot surrounding it. You see, Angels vs. Demons is just that – pitting the imaginary creatures against each other. Yet, the slot itself is completely enthralling, thanks to the inclusion of superb graphics and exceptionally entertaining inbuilt features. 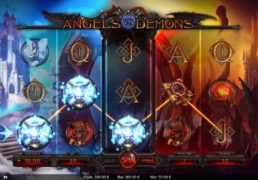 This online slot game incorporates five reels for you to spin, and there’s a set of three rows included alongside. Additionally, you will find 20 paylines are in play across this layout. You’re not able to change the number of these that are in action, although you can alter the bet that you place on them. This is done with the plus and minus buttons at the bottom of the reels. Using them, you can select a wager of between €0.01 and €10 per line. This means that €200 per spin is the game’s maximum overall bet.

My first impression of this game was one of total admiration, thanks to the inclusion of such wonderful graphics at the hands of AGames. The background to the reels is split in half, representing the angels’ and the demons’ dominions. Upon the reels, you’ll see the inclusion of playing card symbols starting at J and running up through Q, K and finally to A. The latter of these can multiply your wager by up to 40 times. Then comes a demon skull, an angelic chalice and a gargoyle symbol. There’s also a fairy as a symbol, which can pay-out up to 150 times your bet. Finally, the spell book acts as the highest paying standard icon. 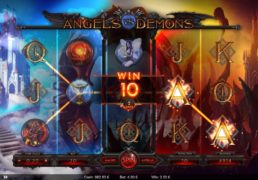 While playing this slot, you may see wild symbols come into action. These can show up in the form of an angel or a demon. The angel wild appears on reel one, while the demon appears on reel five. They will then move one place to the right or left of the reels respectively at the start of each re-spin afterwards. Wilds substitute for all other standard icons on the reels, helping you to form wins.

There’s also the possibility of seeing a Double Wild come into play. This is my favourite part of Angels vs. Demons, as it also triggers the slot’s free spins round. This happens if a Demon wild and Angel wild merge together on the reels. Depending upon which zone the merger happens, you’ll trigger either 5 Angel Free Spins or 5 Demon Free Spins.

If the wilds merge on the third reel, then you’ll activate free spins with Totem Wilds, which move to each other. 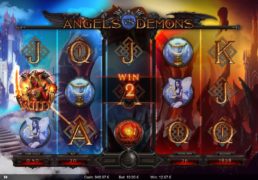 There’s very little that can be done to stop me from playing this slot game over and over again. AGames has made sure to make it compelling, enthralling, entertaining and so much more. It does this through including superb graphics and animations and then combining this with one or two very nicely designed special feature rounds.

Jump into this slot game which puts Angels in a match-up against Demons, thanks to the design qualities of AGames. While playing this slot, you should watch out for the appearance of Moving Wilds, Double Wilds and so much more.

Hurray! There is a competition going between users of our site!
You have to do nothing, but browse out site, and win a daily prize. Click here to read more.
You current ranking:
Time Left: 2h 49m 56s