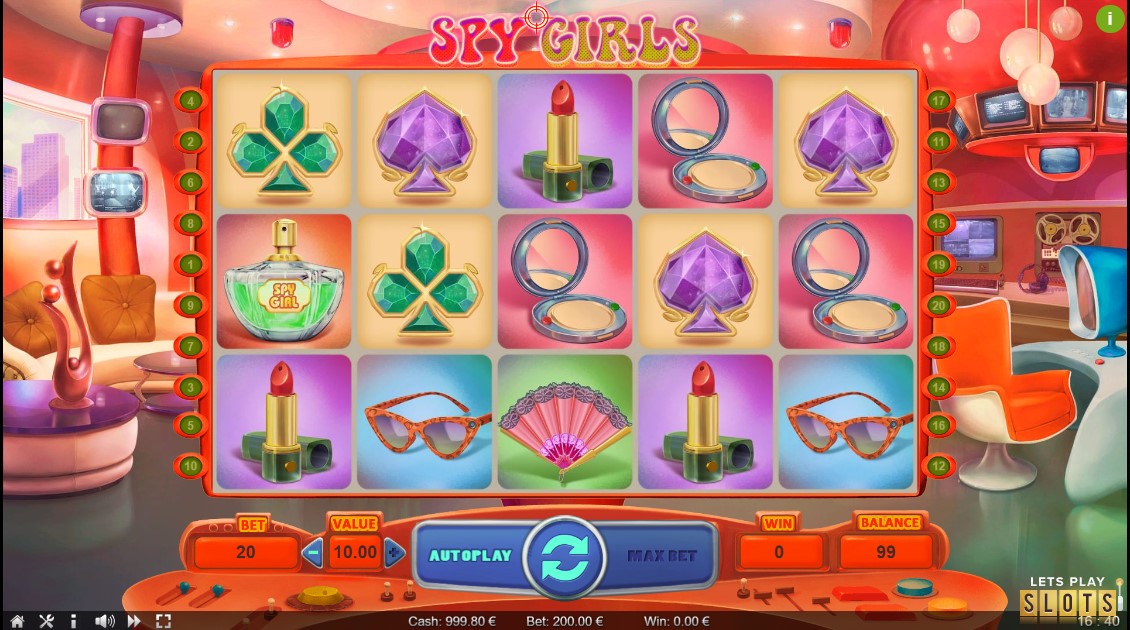 Charlie’s Angels have nothing on these Spy Girls. This slot offering from AGames is certain to entertain you, with high-quality graphics, expanding symbols, 20 pay lines to win on and more. Watch out for the bad guys and holler at these girls to catch them! 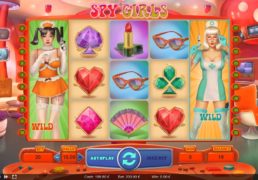 The Spy Girls online slot game aims to take all of your fantasies about girls in disguises and costumes and turn them into reality – well, at least three of them, that is. This AGames slot offering provides an intriguing look inside the world of what it must be like for a spy – if they were designed in the way that Charlie’s Angels were created. It’s a fun game from the developer, incorporating a lot of feminine, glittery images and features for you to experience. 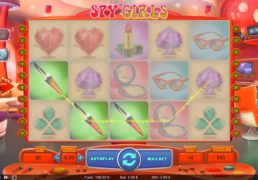 The first thing that jumps out at you about this game is its completely vibrant colour-scheme, featuring pinks, reds, purples and everything else associated with femininity. The layout consists of five reels and three rows in total, making it a standard design for a video slot. It’s nice to see that there’s 20 pay lines to bet on, although these are fixed in position, so you’re not able to customise them on way or another. You can change your bet value with the arrows at the bottom of the screen, giving you the choice of coin values between €0.01 and €10. This means that a maximum bet of €200 per spin is possible.

On the reels is where you will find the game’s various symbols, starting with playing card suits designed like gemstones. These are the slot’s lowest paying symbols, with the red heart paying out a maximum of 60 times your in-play stake. Next in line is the bottle of perfume, multiplying your stake by up to 100 times. There’s a pair of fancy sunglasses as a symbol as well, while a pink fan and some lipstick come next. The vanity mirror is the highest paying standard icon, able to provide a pay-out of up to 300 times your wager. 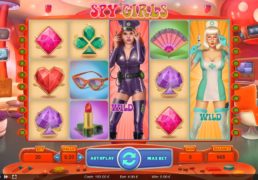 The three girls themselves make up the symbols in the game that you need to watch out for. There’s a spy girl dressed as a nurse, another as a police officer and a third as a maid. They appear on reels one, three and five only, and they all operate as wild symbols in the slot. This means that they can substitute for other icons on the reels to help you form winning combinations.

If there comes a time when two of these spy girls symbols appear on their respective reels, they will expand to cover the reels in their entirety, giving you the chance to form several wins at once.

Speaking personally, I quite enjoy the overall theme and idea behind this AGames slot. I would have liked to have seen more inbuilt features, although it’s nice to see a freespins round and expanding symbols together. A bonus round would have made sense with such an ideal theme behind this game. However, the developer does utilise some impressive graphics throughout and the game runs smoothly.

Charlie’s Angels have nothing on these Spy Girls. This slot offering from AGames is certain to entertain you, with high-quality graphics, expanding symbols, 20 pay lines to win on and more. Watch out for the bad guys and holler at these girls to catch them!

Hurray! There is a competition going between users of our site!
You have to do nothing, but browse out site, and win a daily prize. Click here to read more.
You current ranking:
Time Left: 8h 32m 0s
Gambling is for 18+ though some countries may have other restrictions...Remember you should always Gamble Responsibly
We use cookies to ensure that we give you the best experience on our website. If you continue to use this site you agree to allow us to use cookies, in accordance with our Terms & Conditions.Agree & Close