Monkeys have appeared in slot games before, but never in the way that Booming Games brings them to life in Cheeky Monkeys Have an enjoyable time while spinning its reels and experiencing its sixth Bonus Reel, Interacting Symbols and more.

It seems as though software developers like to go for specific animals to focus their games around. And monkeys have found their way into multiple different offerings from various providers. Cheeky Monkeys is one such game, coming from the Booming Games brand. What struck me the most about this slot, is that it tries to do things that bit differently. Therefore, you can see extra touches from the developer that help it to stand apart from the rest of the monkey-central games out there. 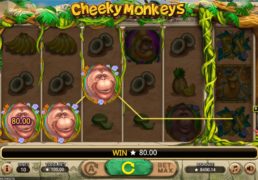 The layout of the main game provides you with six reels, although one of them is sort of cut off from the rest and features visibly different symbols on it. This is the bonus reel that can enhance your wins. Across the reels, there are 10 pay lines for you to bet on. These are set in position, but you can change the wager that you place on these lines. The game provides amounts of between £0.10 and £500 per spin for you to select from.

The symbols that you’ll get to see on this slot’s reels are pretty much what you’d expect when you consider its theme. Booming Games has designed them perfectly though, with a coconut, a pineapple, bananas and a lime being visible as its lower-paying additions. Three higher-paying symbols can be seen in the form of three different primates. The highest of these can pay out up to £4,500.

There’s also the addition of a wild symbol, which is the jungle flowers. This one can substitute for all other standard icons on the reels, helping you to create winning combinations. It can also pay out up to £10,000 for five on a pay line. 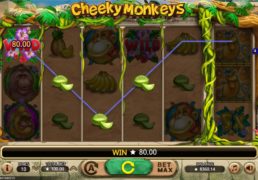 I’m very much a fan of the inbuilt features that Cheeky Monkeys provides. These include the aforementioned sixth bonus reel, which is comprised of free spin scatters, +1 free spins scatters, multipliers up to times five and Interacting Symbols.

If you don’t trigger the free spins round via the sixth reel though, you can also trigger it by spinning three scatter symbols into view anywhere on the reels. You’ll be given five free spins to begin with and all your winnings during this round will be multiplied by five as well.

Interacting Symbols in the slot need to appear side by side on reels five and six. If this happens, they will perform an interaction which will then award you 10 times your total wager as a pay-out. This increases to 50 times your stake during the free spins round. 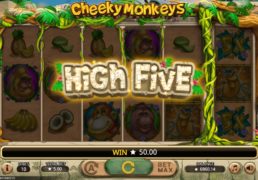 It’s about time that some developers chose to improve the overall excitement factor of games like this. The monkey theme has been done to death and Booming Games has managed to make it seem fresh and entertaining in this game. I like the addition of the sixth reel and the free spins round, while the wild and scatter icons give it much more of a rounded feel. Overall, Booming Games has done a great job with Cheeky Monkeys.

Monkeys have appeared in slot games before, but never in the way that Booming Games brings them to life in Cheeky Monkeys Have an enjoyable time while spinning its reels and experiencing its sixth Bonus Reel, Interacting Symbols and more.

Hurray! There is a competition going between users of our site!
You have to do nothing, but browse out site, and win a daily prize. Click here to read more.
You current ranking:
Time Left: 10h 20m 46s