There’s a queue outside the Boom Shakalaka club, with cats of all shapes and sizes waiting to get in. Playing this slot from Booming Games will allow you to experience some intriguing graphics, with a Scatter, Wild and even a Jackpot amount to win. 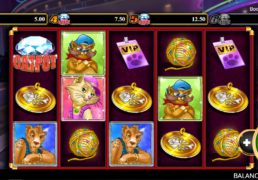 I have to admit that I haven’t checked out a massive number of Booming Games offerings before. Yet, having now played the Boom Shakalaka slot, it’s safe to say that I’ll be making more of an effort to access the brand’s future games. This one welcomes you to the club known as Boom Shakalaka, which seems to be the hippest club in town for the felines of the streets. It’s got a funky soundtrack that backs this up as well, while the developer definitely includes some high-quality graphics alongside. 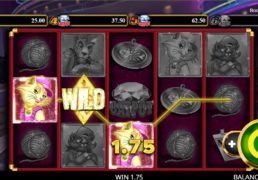 The setup of this slot is standard for an online slot, featuring five reels and three rows in total. This is joined by a total of 25 pay lines for you to wager on, which are fixed in position. It’s nice to be able to customise the bet that you place so much though, with multiple choices between €0.25 and €500 to choose from.

As far as the visual side of Boom Shakalaka is concerned, you’ll get to witness some fun and appealing symbols on the five reels. The first of these is the shimmering ball of yarn, which can pay out up to €600. A VIP Pass acts as another symbol, while the golden collar disc is the last of the lowest-paying additions. Four cats can also be seen as symbols, with the highest one able to pay out a maximum reward of €1,200 altogether. 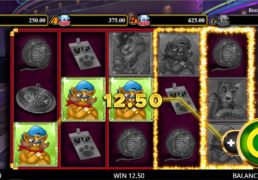 If the quirky symbols weren’t enough, I was quite impressed by the slot’s special features as well. To begin with, there is a wild symbol, which will substitute for all other icons to help you form wins. This rule doesn’t apply to the scatter or jackpot symbols. The wild also has the ability to pay out a reward of up to £3,000!

The game’s scatter symbol is the Boom Shakalaka club sign. The freespins round is triggered when three or more of these come into view on the reels. Up to 15 of these will be awarded to you, depending upon how many scatters are on display.

And last but not least, my favourite part of the slot – the progressive jackpot amounts. The “Catpot” symbol is what will trigger this kind of win, with four different jackpot amounts to win. These amounts will increase every time that you place a bet on the game and you can win one of them whenever three or more of the Catpot symbols show up on a win line. If you manage to spin six Catpot symbols into view (which is only possible through the freespins round), then you’ll receive your stake multiplied by 200 times as a pay-out!

I think that maybe I fell in love with playing this game a little bit, thanks to its fun theme and the great execution of such by Booming Games. Slot games should be entertaining and fun, which is exactly what you’ll experience with Boom Shakalaka. The inclusion of jackpot wins, wilds and a freespins round make it altogether thrilling to play, ensuring that you have an exciting time.

There’s a queue outside the Boom Shakalaka club, with cats of all shapes and sizes waiting to get in. Playing this slot from Booming Games will allow you to experience some intriguing graphics, with a Scatter, Wild and even a Jackpot amount to win.

Hurray! There is a competition going between users of our site!
You have to do nothing, but browse out site, and win a daily prize. Click here to read more.
You current ranking:
Time Left: 13h 52m 55s