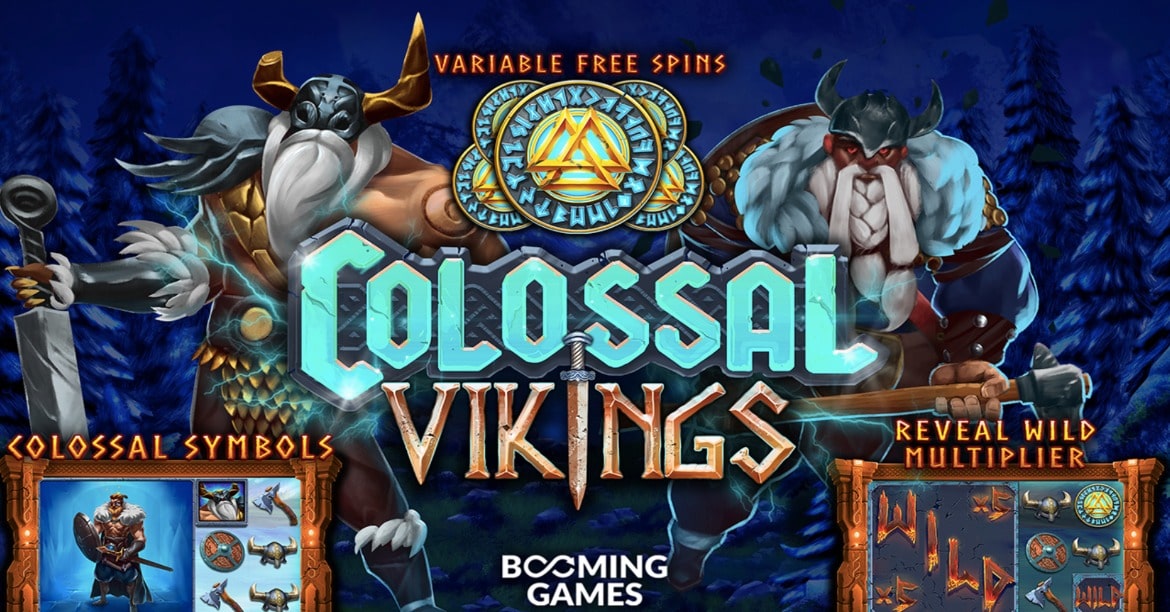 Colossal Vikings is a game with a very interesting concept as four major symbols – three Vikings and a Wild – can all land as 3×2 colossal symbols in the base game, and the paytable prizes are better than what we’re used to seeing in such games. There is also a free spins game, and during the feature the colossal symbols can land as 3×3. The game also has win multipliers up to x10!

Colossal Vikings has 20 fixed paylines and the bet per spin can range between €0.20 and €400, so that’s €0.10 to €20 per payline. The game is easy to set up as you simply select your bet and you’re done. The game is played on a standard 5×3 board but it will be populated by colossal symbols often so that makes the game a lot more interesting than just a classic slot. 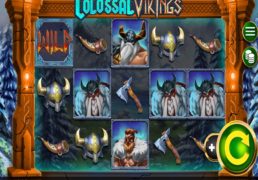 Major symbols, Wild symbols and Reveal Wild Multiplier symbols can all land as colossal 3×2 symbols in the base game. In the free spins game the maximum size increases, and colossal symbols can land as either 3×2 or 3×3 symbols.

The three major symbols are three Vikings, and they pay 5x, 7.5x and 10x for five-of-a-kind respectively, which is a very good prize if we know they can appear as colossal symbols, and the game also has multiplier Wilds. These are awesome – as the win multiplier can be up to x10 and the symbol itself can land as a 3×2 or 3×3 colossal symbol. The win multiplier can be x2, x3, x5 or x10. This is also a paying symbol, with the same prizes as the best Viking. 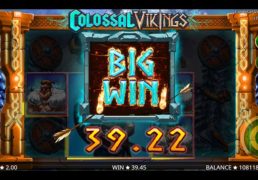 The main bonus feature are the free spins, and they are triggered in the usual way, with Scatters. When you land three Scatters you’ll get 8 free spins, this will rise to 10 if you got four Scatters, and for five Scatters you’ll get 12 free spins. This is the time during which you’ll be getting the majority of your huge wins as colossal symbols can appear as 3×3 symbols, which has a huge effect, and it seems the game is giving you better things during the feature than in the base game.

But still, even though Colossal Vikings is at its best during the free spins feature, this is a game that can definitely pay well during the base game too.

Theoretical return to player (RTP) isn’t revealed by the developer, but Booming Games usually produce slots that have RTP between 95.30% and 96.50% so we can guess Colossal Vikings is likely in the same range. The game seems to be paying well, and RTP is probably near 96%. One thing that’s certain is that RTP isn’t low.

If we knew the RTP we could make a better conclusion about this game, but even without knowing it, it is clear that this is a quality game that can produce huge wins as well as lots of fun. Although it may seem this is a casual slot game for recreational players, it is in fact a serious slot game that can pay well – it has win multipliers up to x10 and these win multipliers can land as colossal 3×3 symbols. What more can you want from a slot game? Colossal Vikings is definitely recommended. You’ll find the game in online casinos that feature Booming Games software.

Colossal Vikings is a game with a very interesting concept as four major symbols – three Vikings and a Wild – can all land as 3×2 colossal symbols in the base game, and the paytable prizes are better than what we’re used to seeing in such games. There is also a free spins game, and during the feature the colossal symbols can land as 3×3. The game also has win multipliers up to x10!

Hurray! There is a competition going between users of our site!
You have to do nothing, but browse out site, and win a daily prize. Click here to read more.
You current ranking:
Time Left: 6h 59m 28s
Gambling is for 18+ though some countries may have other restrictions...Remember you should always Gamble Responsibly
We use cookies to ensure that we give you the best experience on our website. If you continue to use this site you agree to allow us to use cookies, in accordance with our Terms & Conditions.Agree & Close