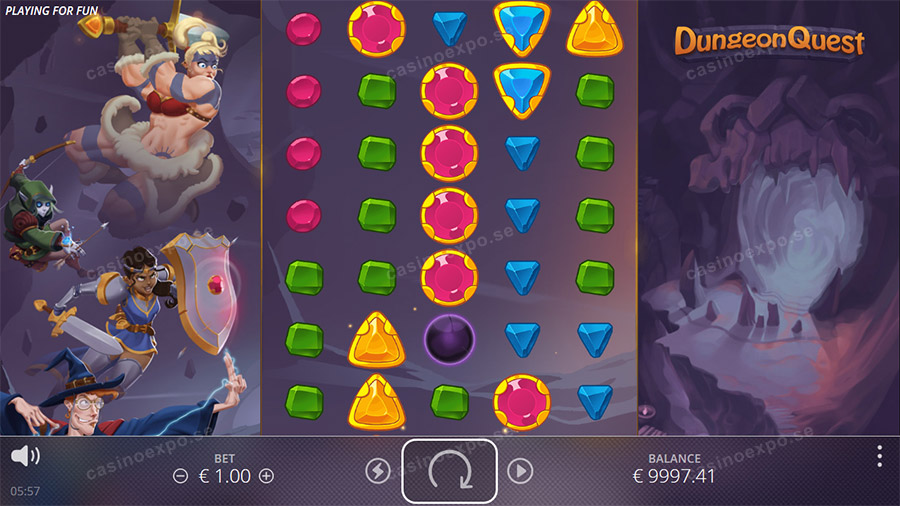 Dungeon Quest is a 2018 release by Nolimit City and a quality slot game with three bonus features that bring big wins. The game is played on a 5×7 board with 29 paylines 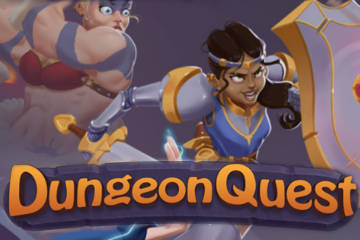 I have played this game for an hour or two in order to be able to give you an honest review of this slot and its pros and cons. The game is a good one despite coming from a lesser known developer, and it seems many unknown developers make quality games these days. This is one of those.

Theoretical return to player (RTP) is 96.27%, a decent level, and the game feels much more rewarding than that as the bonus features that get activated randomly during the main game usually bring big wins, and then there’s a free spins game that is very rewarding. Variance is medium, perhaps even a bit low.

The game is played on a giant 5×7 board, so there are still five reels as we’re used to, but thery’re incredible seven symbols high. This makes the board look more like one of those Candy Crush clones though it has standard game mechanics and it isn’t a cluster pays or exploding blocks game. All the symbols appear stacked, which makes it possible to land a large number of winning paylines at once if the reels line up correctly. 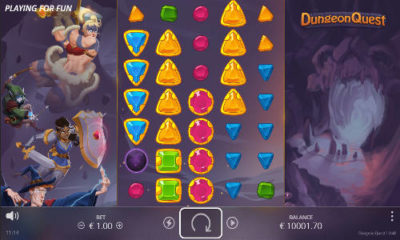 Nolimit City opted to use 29 paylines to cover this gigantic board, and all paylines pay left to right. The bet per line is total bet divided by 20. You pay between €0.20 to €100 to play those 29 paylines that are fixed. There are only eight symbols in the paytable, and they are Ores and Gems. The four Ores can be forged into Gems, and that’s what makes one of the two special features possible. The two groups of symbols aren’t that far apart when it comes to value though, roughly 2x in favor of Gems. You can expect to get 5x and 1.5x your bet for five-of-a-kind of a Gem or Ore respectively, making this a low variance paytable in which you must land many winning paylines to get a significant win. There’s also a Wild and a Scatter.

There are two special features in the main game, and both get activated randomly, and you’ll get a nice win every time. Gem Forge randomly selects one of the Ore symbols, and it will first make all other Ore symbols that same one Ore symbol, and will then upgrade all those Ore symbols to the Gem version. This will mean you’ll have tons of same Gems on the board, which will likely result with many winning paylines. Power Stone is the second random feature, and it will place a 2×2 Wild symbol randomly on the board, and then the feature does another thing, it will pick one Ore symbol and then all occurences of it on the board will turn into Wild. This is an incredibly powerful symbol that will leave you with a lot of Wilds. 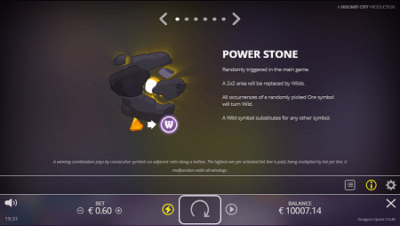 Apart from the two randomly activated main game features, there’s a free spins game in Dungeon Quest and it’s a powerful one. You will only get 4 free spins when you land Scatters on reels 1, 3 and 5, and experienced players will know this is a sign that the free spins are very rewarding. They are. Before each spin one of the Ore symbols will be randomly selected, and all occurences of that symbol will turn into a Wild until the end of the feature. It accumulates, so by the fourth spin you’ll have your board covered in a lot of Wilds, perhaps more than in any other free spins game.

Dungeon Quest is a great slot game because of those bonus features that make it both exciting and rewarding. The game is very enjoyable and fun to play, because of game mechanics and because of the bonus features. Theoretical payout is good enough, and the theme is good as well, so this is a well rounded slot game and a must-play title.

Dungeon Quest is a 2018 release by Nolimit City and a quality slot game with three bonus features that bring big wins. The game is played on a 5×7 board with 29 paylines

Hurray! There is a competition going between users of our site!
You have to do nothing, but browse out site, and win a daily prize. Click here to read more.
You current ranking:
Time Left: 21h 27m 15s